Twitter is one of the oldest social platforms, arriving on the social scene in 2006, just two years behind Facebook. It has evolved through the years and now counts many prominent influencers as users. From former presidents and award-winning singers to notable business leaders and fashion icons, Twitter has a vast base of influencers.

There may be a few newcomers who are still willing to trade products for favorable posts on Twitter, but expect most influencers to ask for payment.

Compensation varies. Why? No two influencers are alike. Each has his or her own audience, voice, values, cadence, and content quality, which is why influencer marketing is so hard to price. There are, however, factors that drive compensation up, such as:

As you might suspect, influencers with mega audiences often charge more. You’ll see a direct correlation between compensation and audience size.

Different types of content require different time commitments. A Twitter image costs less than a video. A product review costs less than an ebook. The more work it takes to create the content, the higher the cost.

Some creators may also charge to create content that is promoted in paid ads.

Twitter influencers are actually the most affordable option for a brand. For a few hundred dollars, an influencer can craft a tweet with the appropriate tags and hashtags. IZEA has analyzed influencer compensation and offers specific details.

Why is Twitter so inexpensive? The most likely reason is its content simplicity. The platform is text-driven, so it often takes less effort for an influencer to write a 280-character message that promotes a product or service. Still, they can be effective campaigns, especially for a brand’s inaugural outreach. 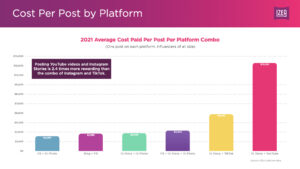 As mentioned, the size of an influencer’s fan base plays a role in compensation, too. Influencers are broken into groups based on the number of followers they have. The tiers are as follows:

The State of the Influencer Earnings™ 2022 shows payment across all platforms based on an influencer’s audience tier. You’ll notice compensation increased from 2020 to 2021 for all tiers.

All of these rates represent record highs since IZEA started tracking payments in 2015. In IZEA’s creator marketplace, brands can also find creators with rates starting at $50 for Twitter posts. That’s because this platform allows creators to set their own prices. 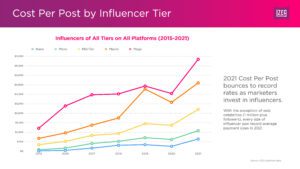 Ready to work with a Twitter influencer? Before you reach out, review the State of Influencer Earnings 2022 report from IZEA today. You’ll get an in-depth analysis of the influencer marketing economy and learn what it means for your brand’s marketing budget.