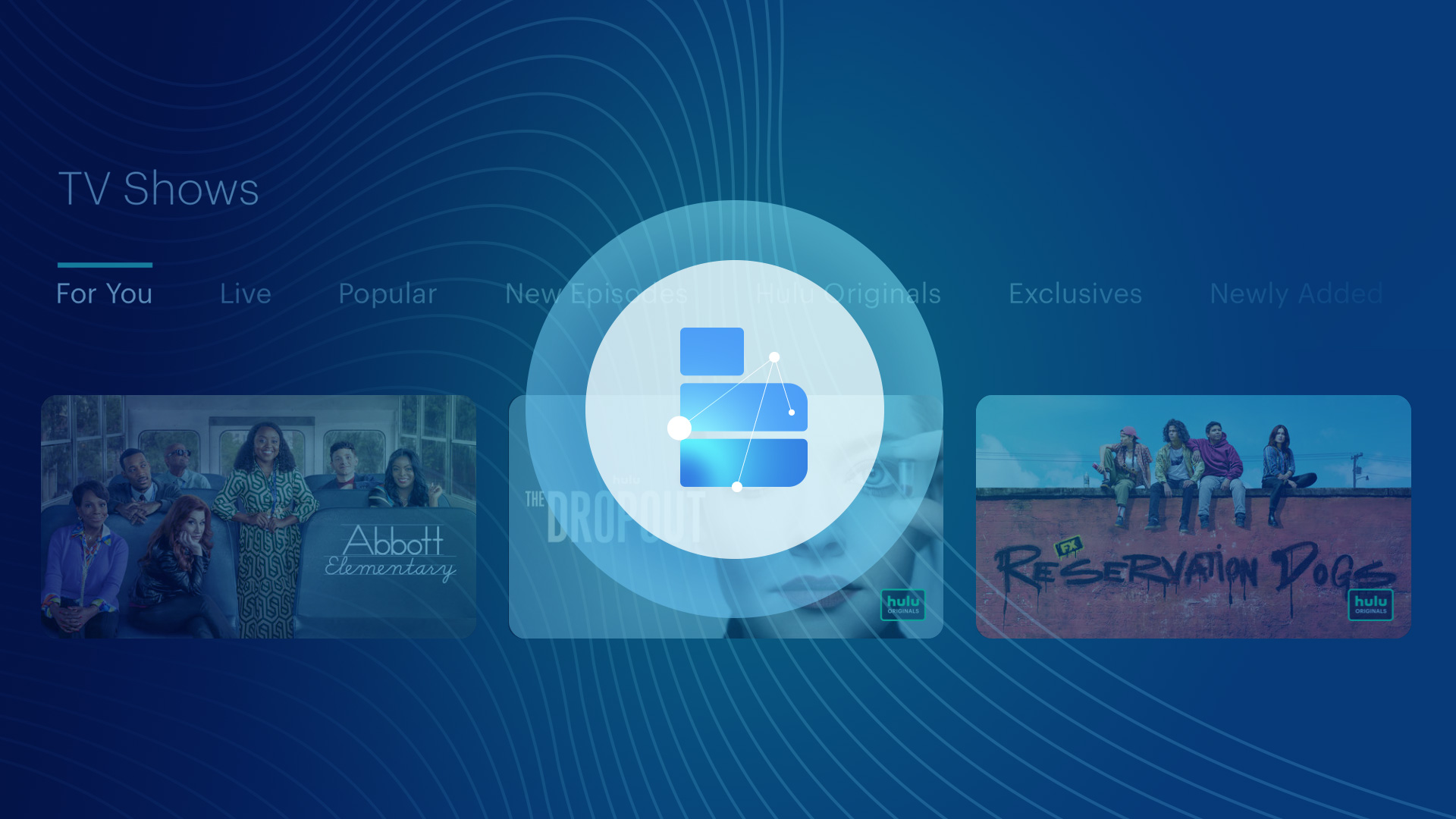 In 2022, we had a lot to talk about on social media. BrandGraph 500, which ranks top brands by social content volume, breaks down what brands had the biggest increases in social content last year and also looks at which brands didn’t have their best year ever.

BrandGraph scanned over 2.1 billion pieces of content across 43 million different social media accounts in 2022, and it is constantly updating. Rankings may change over time.

As expected, the media and entertainment category kept us talking on social media.

Will Smith, one of the most famous entertainers, stirred many conversations after the infamous slapping incident involving Chris Rock at the Oscars. This moment was hotly debated on social media, prompting Smith to rise 266 spots to No. 78 in the BrandGraph 500, the most movement on the rankings in 2022.

Comedian Steve Harvey rose 146 places in the BrandGraph 500 ranking as he began hosting “Judge Steve Harvey” on ABC. The show was picked up for a second season.

Lizzo climbed 121 spots in the year she released “About Damn Time,” which inspired a viral dance trend on TikTok, and she became the People’s Champion at the People’s Choice Awards.

Lil Nas X had the biggest drop among entertainers, lowering 244 places to No. 413. He had a quieter 2022 after generating lots of both praise and controversy in 2021. He also launched his first world tour.

It surged again in August 2022, when popular shows and films began streaming, including “Reservation Dogs” and “Mike,” a film about boxer Mike Tyson. Hulu also had co-exclusive streaming rights for the popular ABC show “Abbott Elementary.”

Other possible contributors: The Kardashians moved to Hulu in April 2022 and premiered the next season in September 2022, and Charli and Dixie D’Amelio, both mega TikTok influencers, starred in a Hulu reality show with its second season premiering in September 2022. Hulu also regularly uses influencer marketing to promote its shows. According to BrandGraph, working with @jaxwritessongs on a sponsored video gave Hulu an engagement rate of 12.97%. 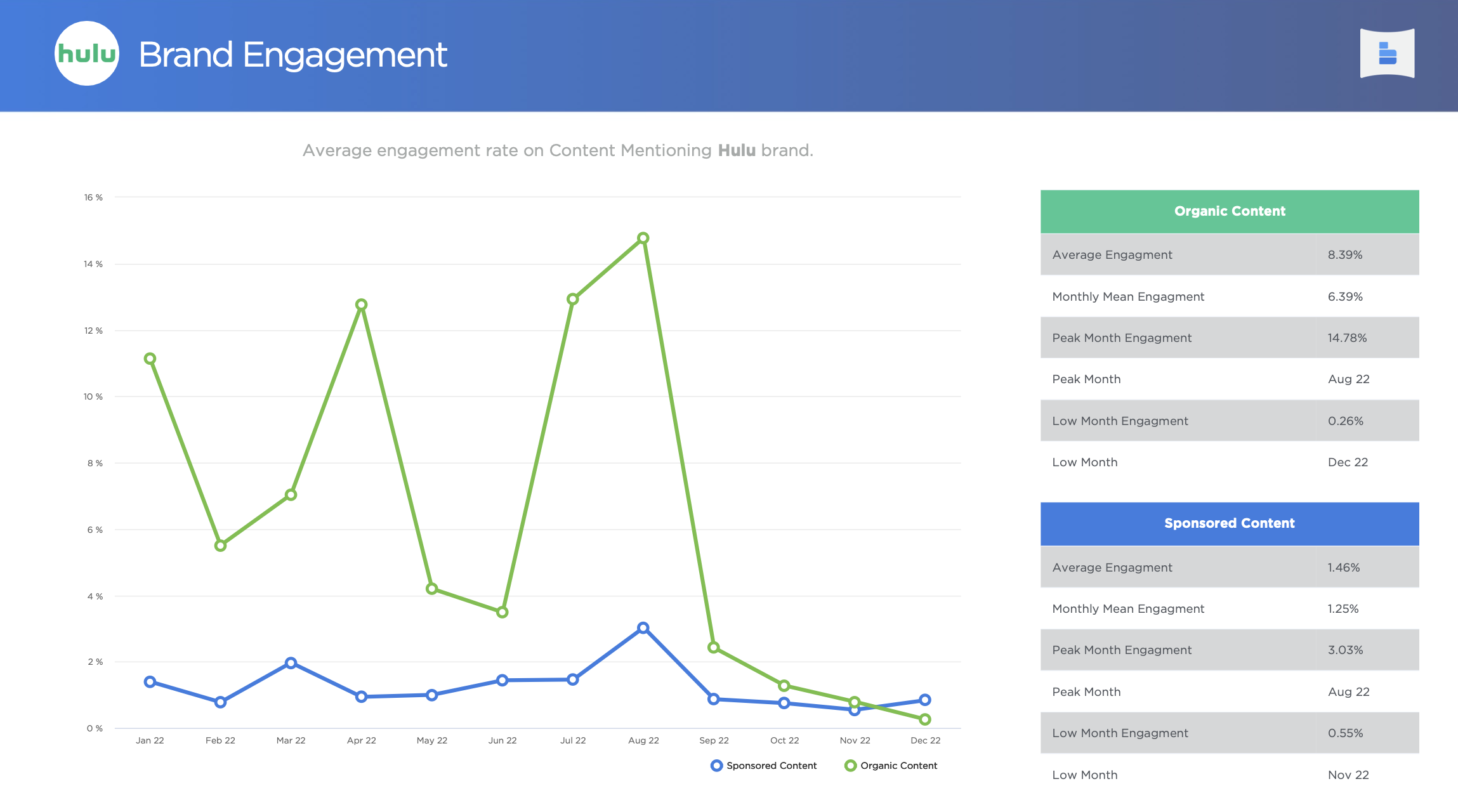 Twenty NBA teams made the BrandGraph 500 in 2022. The Boston Celtics were up 247 to No. 178 by making it to the NBA Finals, which also surged 111 places to No. 241. The 2022 NBA Finals champs, the Golden State Warriors, climbed 196 places to No. 204 despite being No. 1 in the league that year. The Miami Heat, who came within one game of the finals in the previous season, increased 215 places to No. 275, although the team has faced struggles in the current season.

OpenSea, the NFT Marketplace, also generated a lot of talk. NFT sales surged in December as holders moved to lock in tax savings, according to Yahoo Finance. NFT sales volume increased in 2022 as many new NFT projects were launched.

Crypto, in general, had a rough year, but cryptocurrency exchange Gate.io still soared 211 spots in the ranking to No. 267 as it planned the U.S. launch of its crypto services. Well-known exchange Coinbase moved up 52 places to No. 143 and Binance came in at No. 399.

KuCoin, another crypto exchange and a competitor to other more well-known exchanges, jumped 143 spots over the course of the year. KuCoin’s sponsored content boosted its share of voice at the beginning of 2022 before it plummeted in October 2022. Share of voice shot back up at the end of the year, boosted by the FTX collapse that led investors to head to other options. 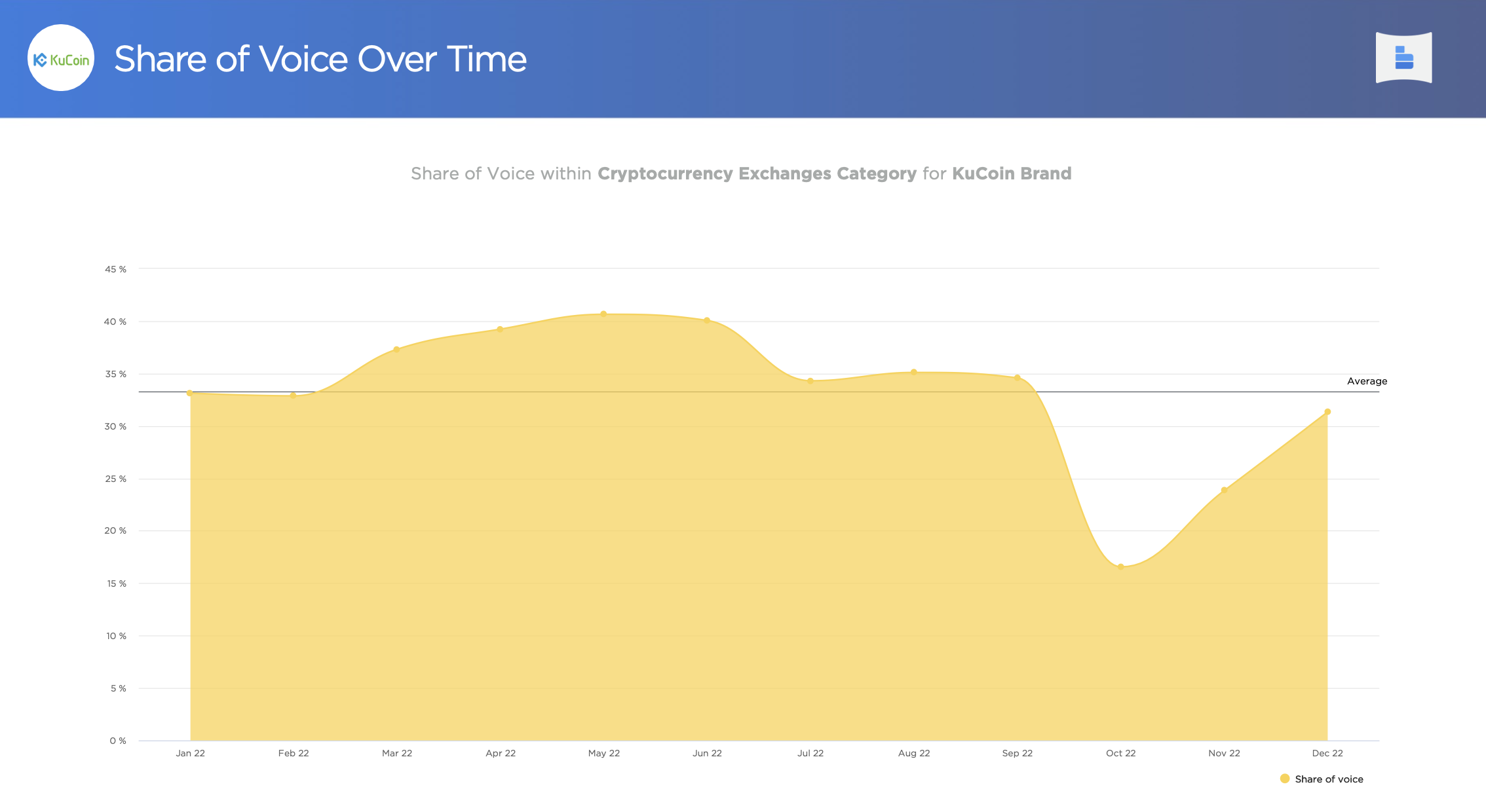 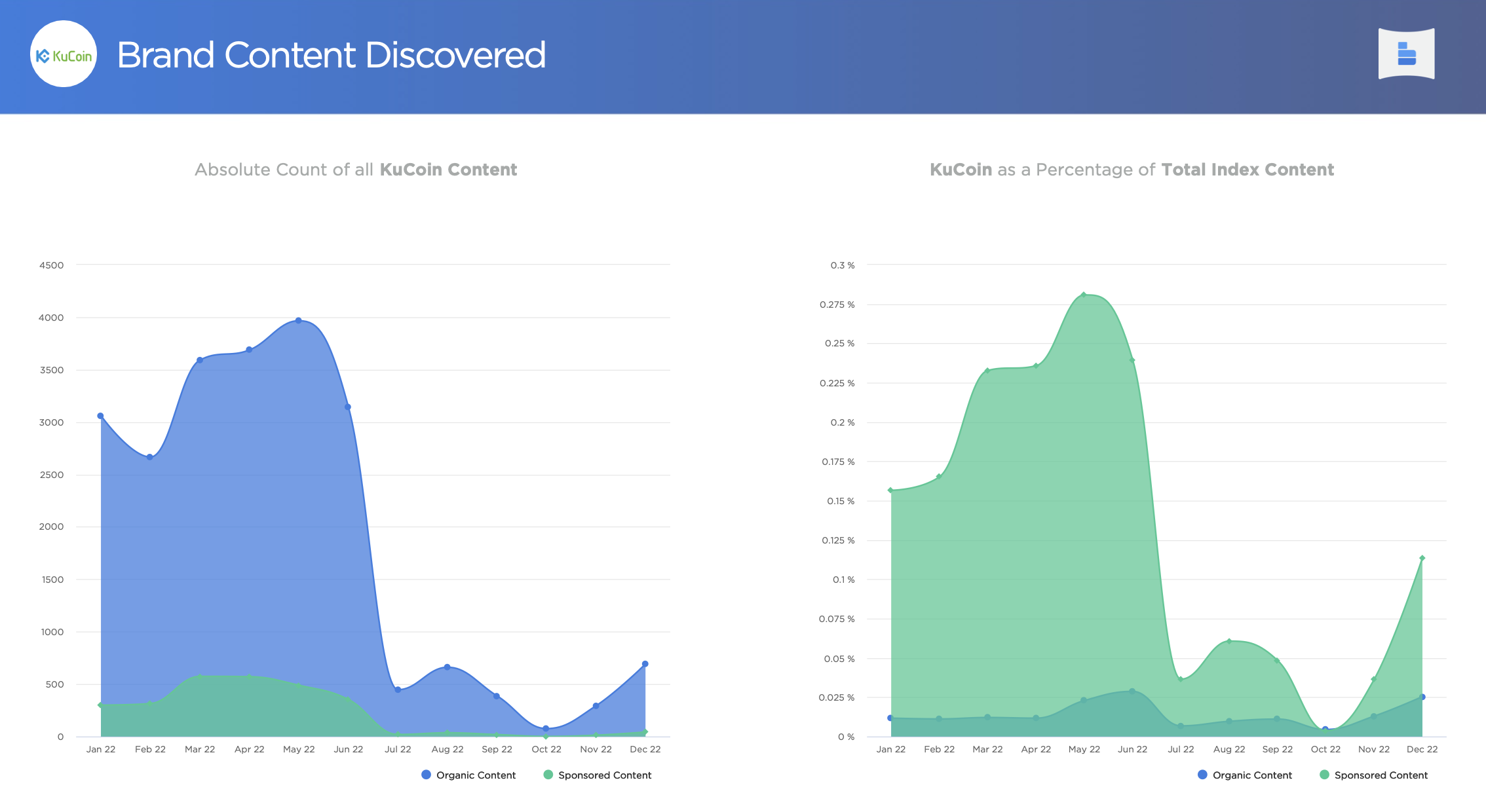 The Supreme Court made plenty of headlines and social media posts this year. It rose 236 places to No. 121 when it released its landmark rulings in 2022. Similarly, the United Nations spiked 128 places to No. 270. Both CNN and Fox, which cover politics and government, climbed significantly in the rankings. CNN rose 131 places to No. 258, while Fox News Channel surged 197 places to No. 286.

Not All Fun and Games

The video game War Thunder climbed 105 places to No. 363. The game, which has been around since 2011, made news when leaked classified military intel somehow made its way onto War Thunder forums. The incident happened during the summer when War Thunder’s share of voice peaked. 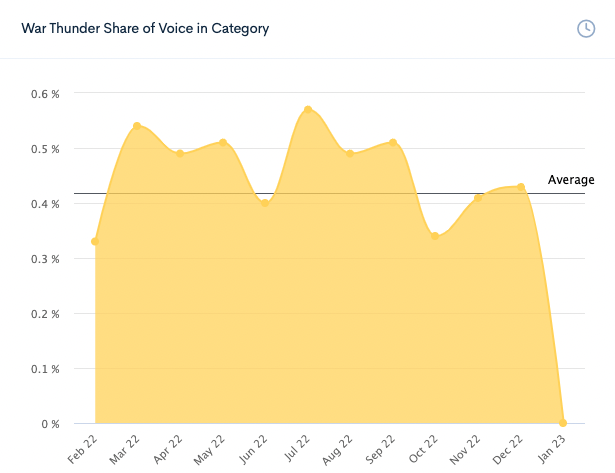 Instagram secured the No. 1 spot on the BrandGraph 500 ranking for 2022. YouTube followed at the No. 2 spot, while Facebook rounded out the top 3. Patreon and Spotify made their first appearances in the top 10 at No. 9 and No. 10, respectively.

Seattle Influencers You Should be Following

Seattle Influencers You Should be Following 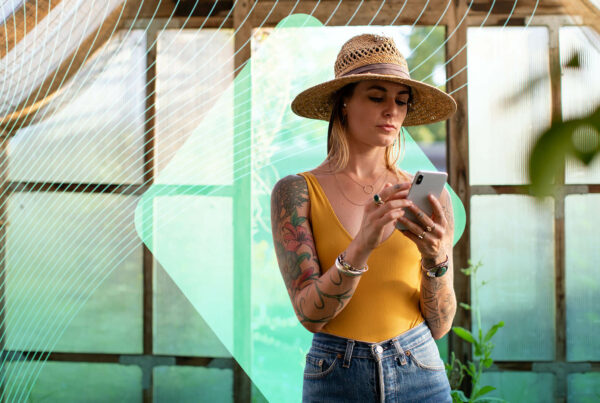 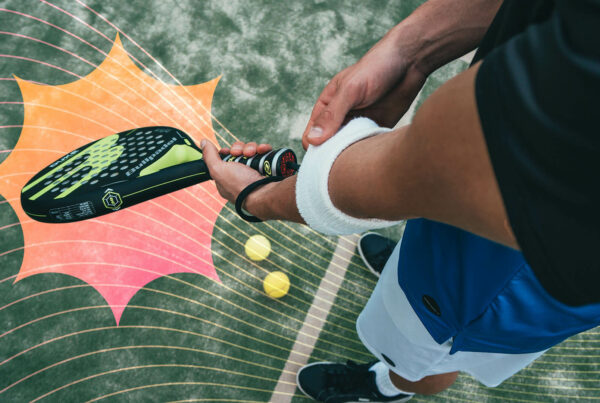 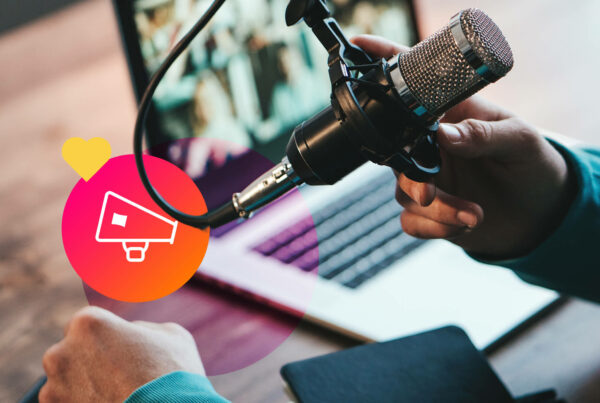