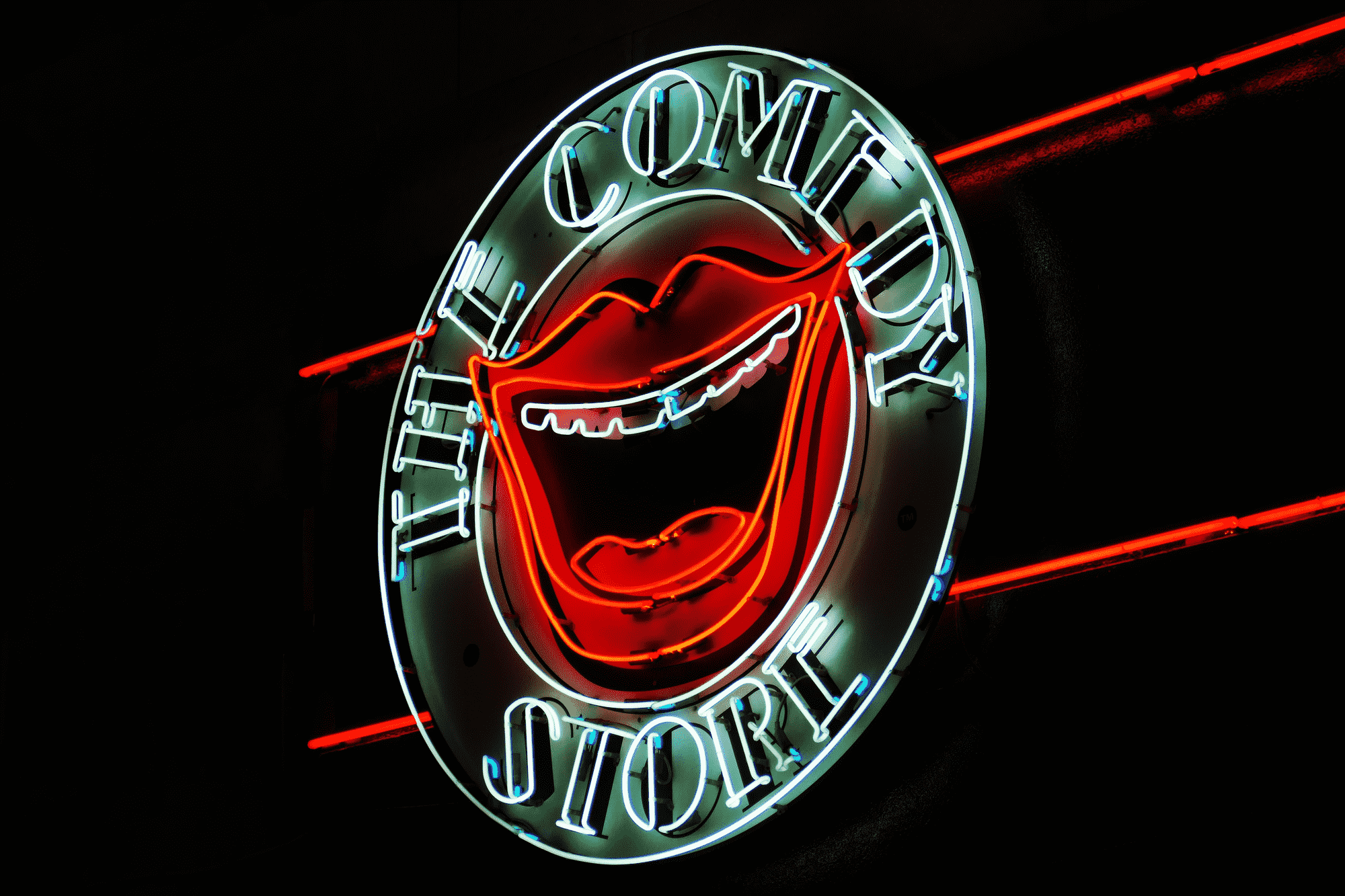 For decades, male comedians dominated U.S. media, from television and radio to recordings and movies. That is, until female comedian Joan Rivers broke the gender barrier, appearing on “The Tonight Show Starring Johnny Carson” in 1968. Now, you don’t have to look far to find top women comedians starring in their own movies and TV specials and drawing big audiences. Fans also flock to their accounts on Instagram and other social media channels. Here are some of the top women comedians on Instagram to know in 2020:

With 83.4 million followers on Instagram, Ellen DeGeneres is a comedian, actress, producer, and the star of NBC’s Emmy Award-winning “The Ellen DeGeneres Show.” She was the voice of the character Dory in the movies “Finding Nemo” and “Finding Dory” and also hosts NBC’s “Ellen’s Game of Games.”

DeGeneres was the star of “Ellen”, which broke ground when she came out as a lesbian on the show. She has appeared in TV series including “Roseanne,” “Mad About You,” “Will & Grace,” “The Bernie Mac Show” and “Six Feet Under.” DeGeneres has partnered with brands including CoverGirl, American Express, JCPenney, Thomasville, Gap Kids, QVC, and Camuto Group. 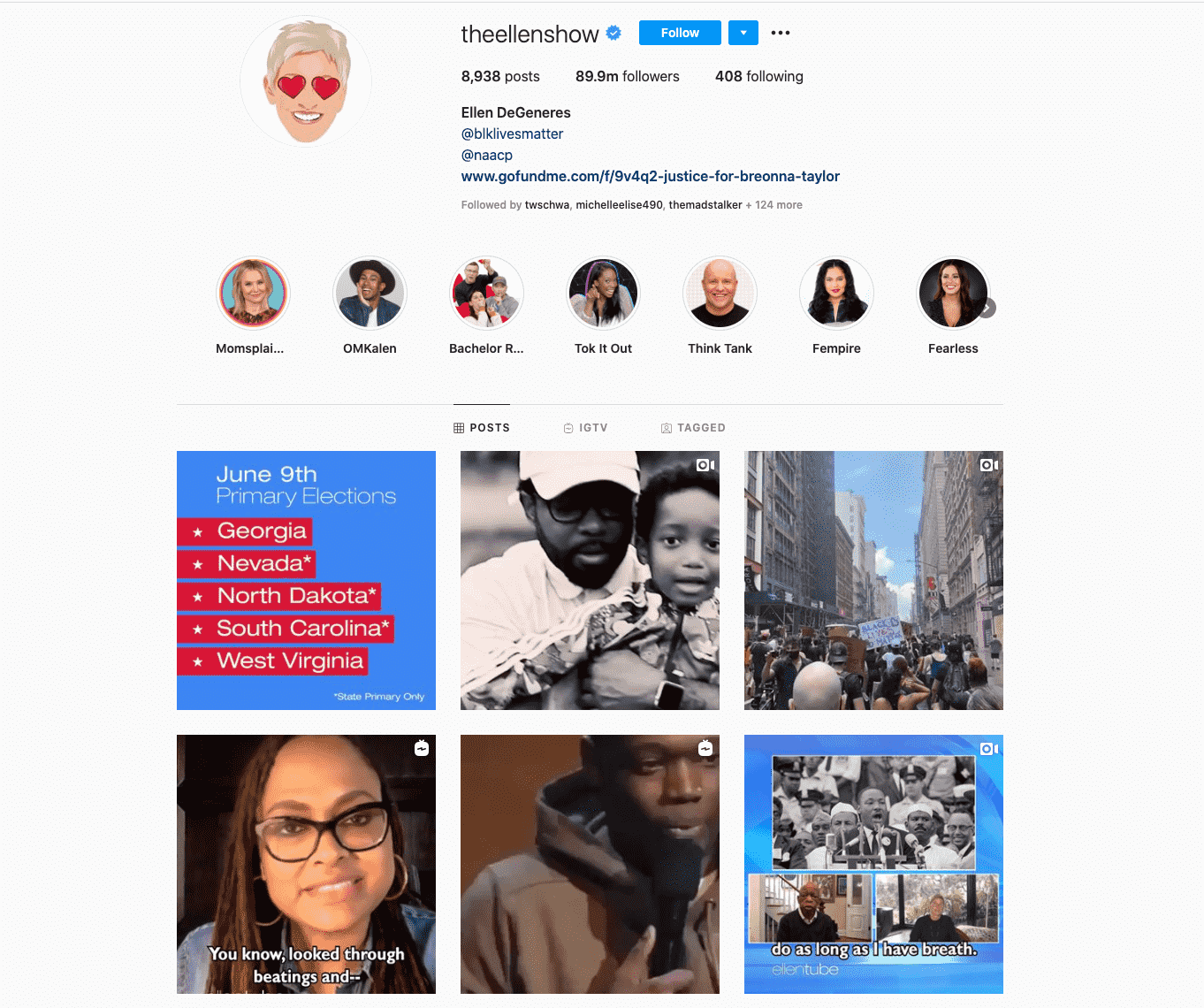 Queens, New York-born comedian, rapper, and actress Awkwafina, star of Comedy Central’s Nora from Queens has attracted 1.5 million followers on Instagram. Awkwafina, whose given name is Nora Lum won the 2020 Best Actress in a Comedy or a Musical Golden Globe Award for her role in the movie “The Farewell.” She has also appeared in films such as “Ocean’s Eight” and “Crazy Rich Asians.” Lum has partnered with brands including HotelTonight and Forevermark Diamonds. 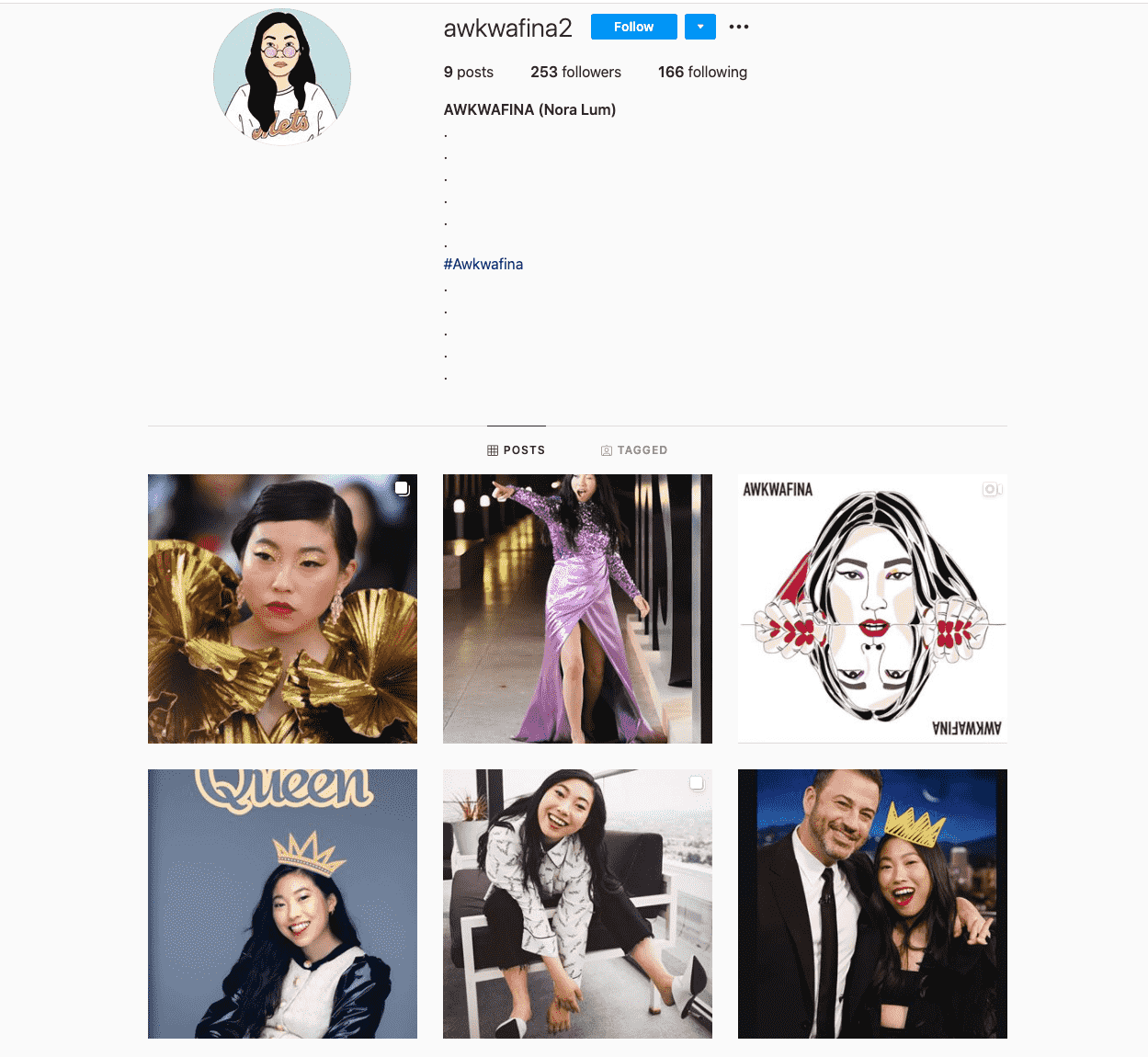 With 9.6 million followers on Instagram, stand-up comedian, actress, writer, producer, and director Amy Schumer is the star of TV specials like Comedy Central’s “Mostly Sex Stuff.” Schumer has also starred in films including “I Feel Pretty,” “Trainwreck” and “Snatched.” Schumer is co-founder of the ready-to-wear collection Le Cloud and has partnered with brands including Beautycounter. 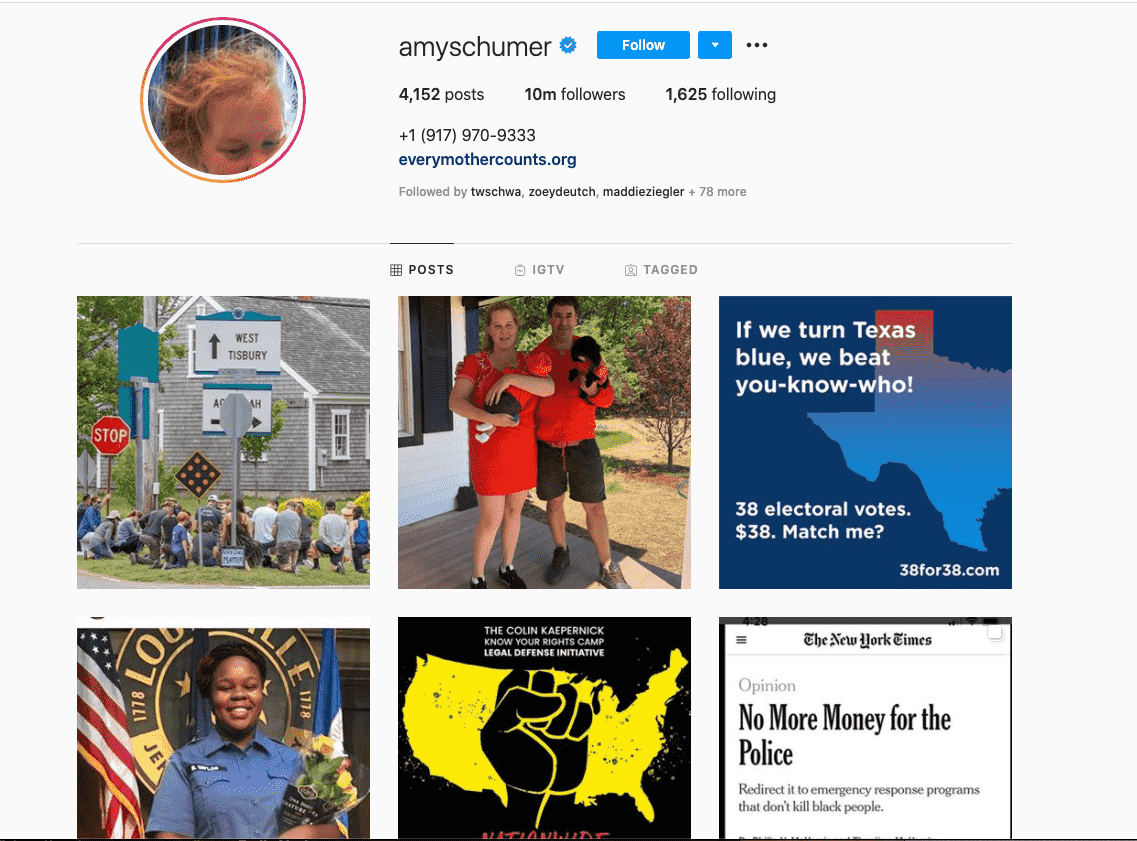 Comedian, writer, and actress Melissa McCarthy has 8.1 million followers on Instagram. McCarthy has appeared in TV series including “Nobodies,” “Saturday Night Live” and “Mike & Molly.” She starred in the blockbuster movie “Bridesmaids” as well as the films “Spy,” “Tammy,” “The Heat” and “Can You Ever Forgive Me?” McCarthy has partnered with Sunrise Brands on her own line of casual fashion with the sportswear brand Melissa McCarthy Seven7. 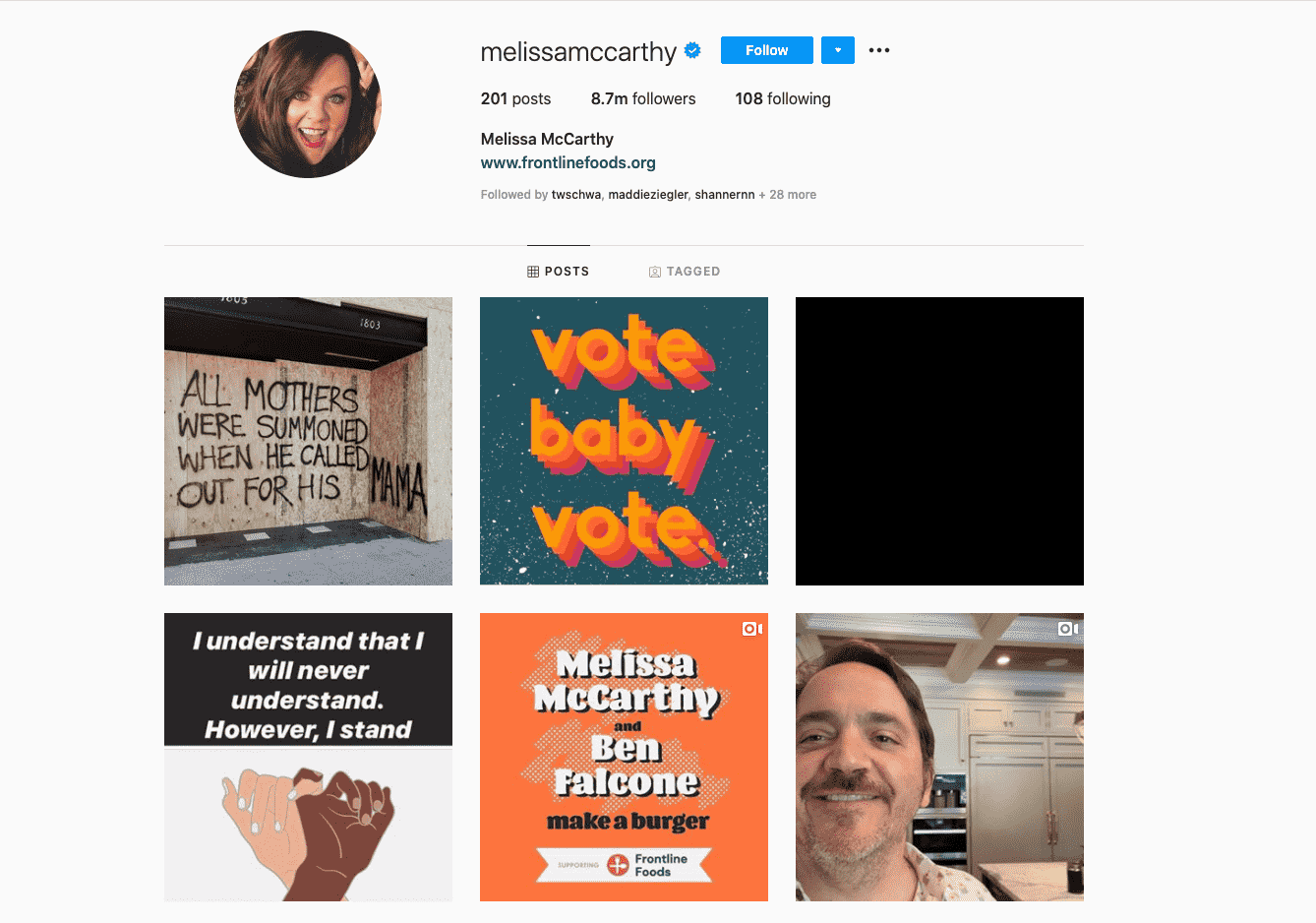 With 5.7 million followers on Instagram, comedian, producer and actress Tiffany Haddish has starred in movies including “Girls Trip” and “Like a Boss.” When Haddish hosted “Saturday Night Live” in 2017, she was the first black female stand-up comedian to do so. She has also starred in specials including Showtime’s “She Ready! From the Hood to Hollywood” and appeared in NBC’s “The Carmichael Show.” She is the author of the New York Times bestseller “The Last Black Unicorn.” Haddish has partnered with brands including Groupon. 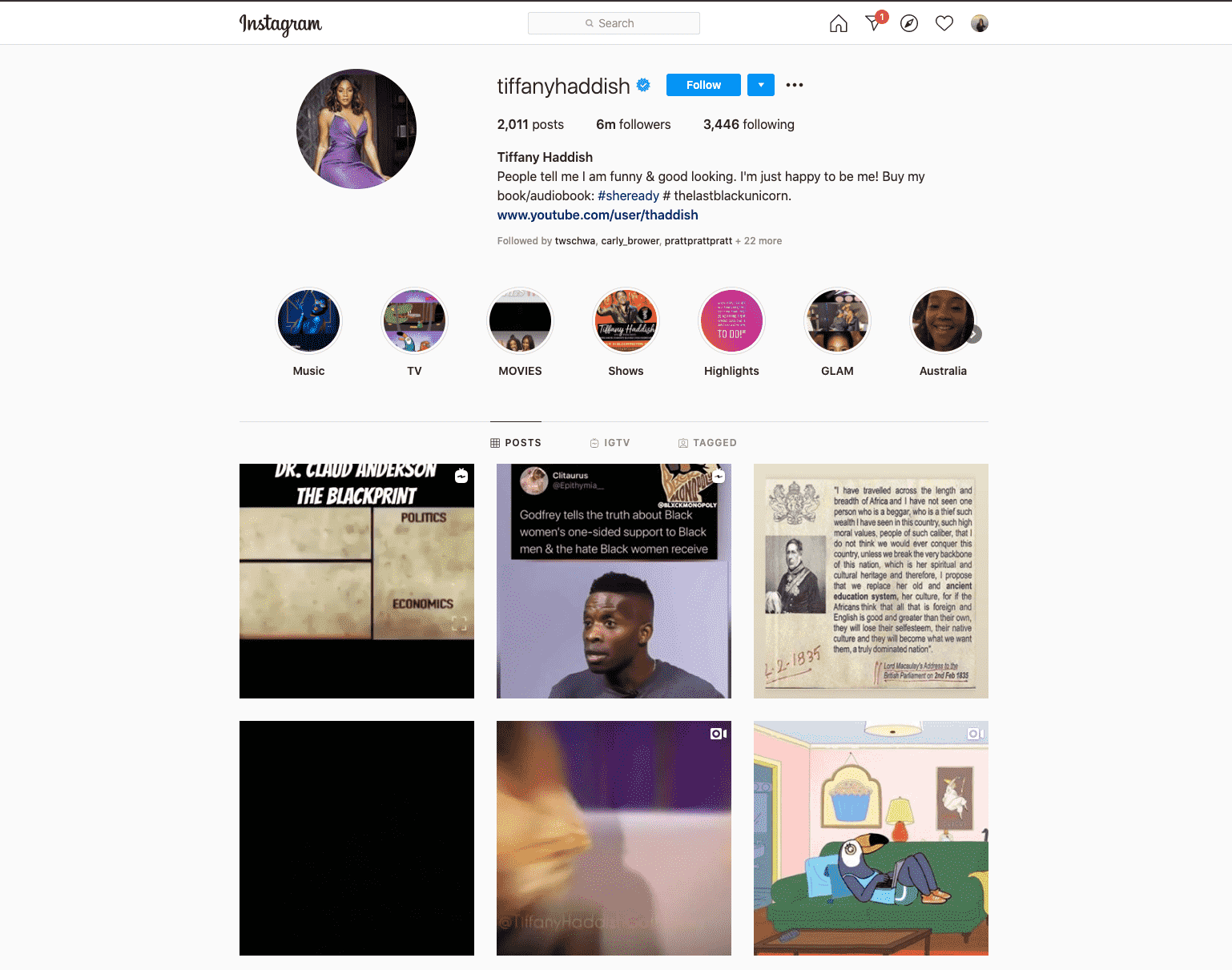 Stand-up comedian Chelsea Handler has attracted 3.7 million followers on Instagram. Handler is the author of New York Times bestsellers including “Are You There Vodka? It’s Me, Chelsea” and “Chelsea Chelsea Bang Bang.” She hosted the comedy-talk show “Chelsea Lately,” and her book “Life Will Be the Death of Me” is also a podcast series. 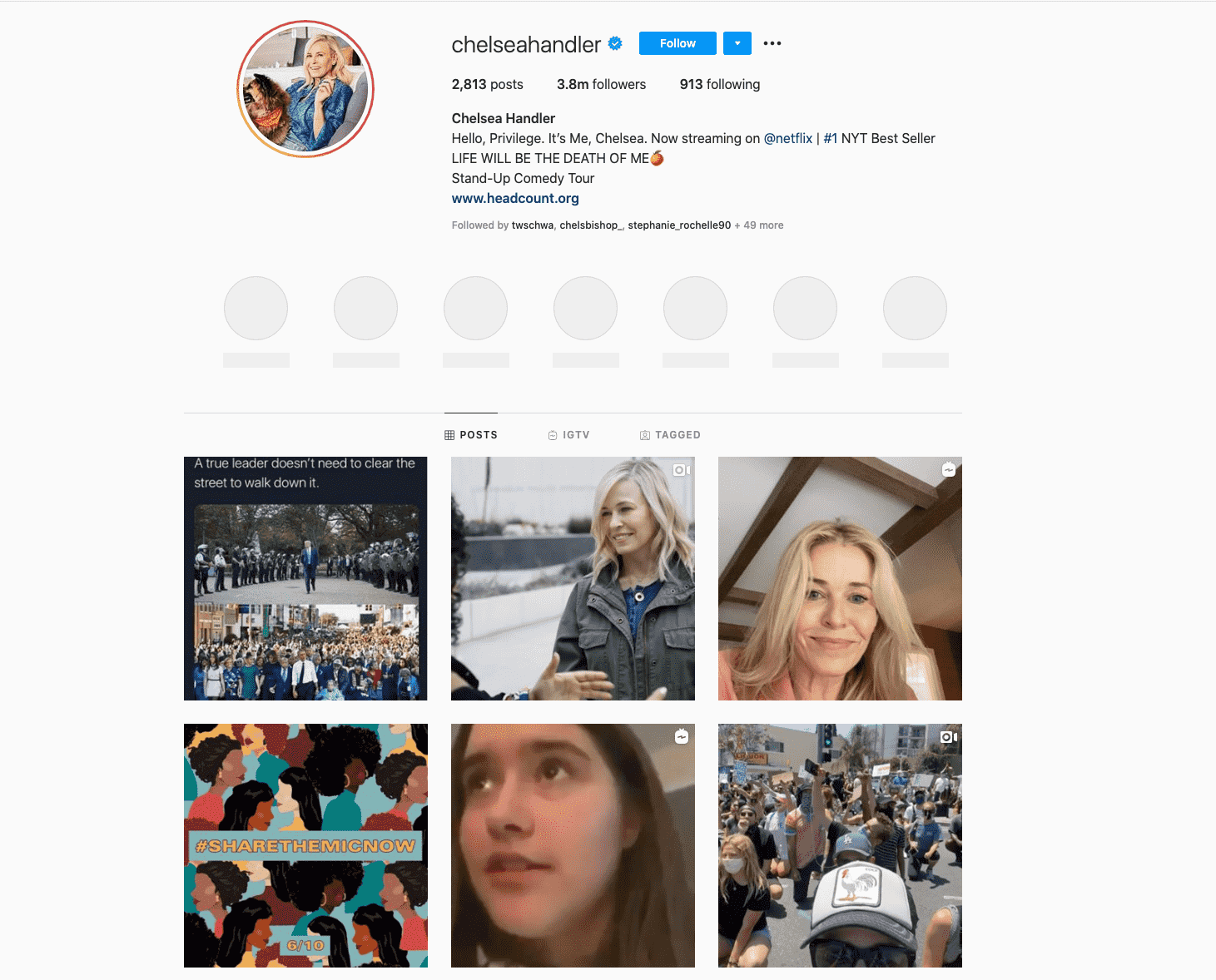 Award-winning stand-up comedian, writer, and actress Wanda Sykes has 442,000 followers on Instagram. She has appeared on TV shows including Comedy Central’s “Wanda Does It” and HBO’s “Curb Your Enthusiasm.” Sykes has also written for TV shows including “The Chris Rock Show,” “The Keenen Ivory Wayans Show” and “The Academy Awards.” She has appeared in movies including “Nutty Professor II: The Klumps” and “Monster-in-Law.”

Entertainment Weekly dubbed Sykes one of the 25 Funniest People in America. She has partnered with brands including American Express, Dannon Light & Fit Greek yogurt, and Gain detergent. 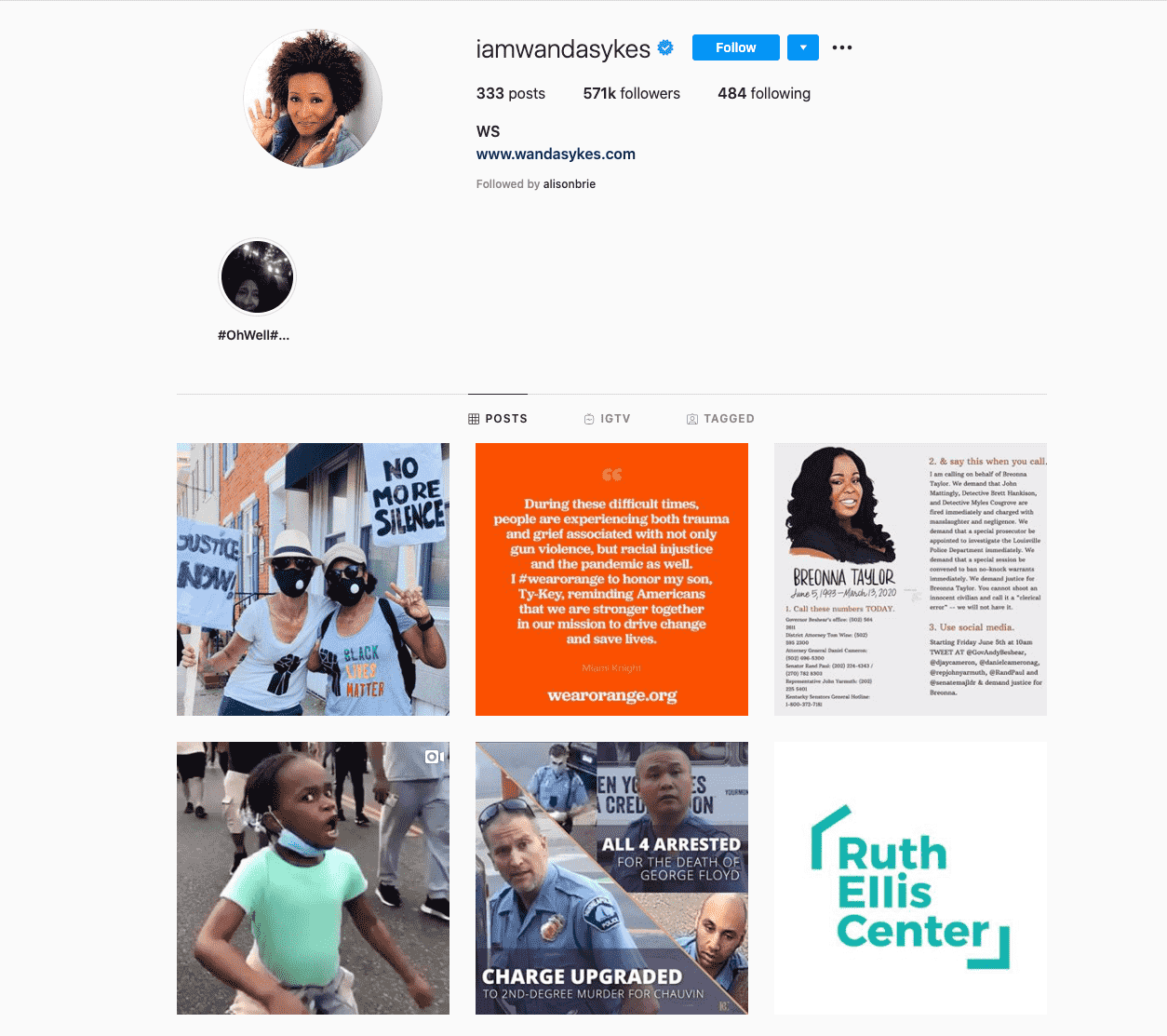 Emmy Award-winning stand-up comedian, writer, and actress Sarah Silverman has 1.8 million followers on Instagram. Silverman hosted the series “I Love You America” on Hulu and has appeared on TV shows including “The Larry Sanders Show,” “The Good Wife,” “Seinfeld” and “Masters of Sex.” She authored the New York Times bestseller “Bedwetter: Stories of Courage, Redemption, and Pee.” Silverman has also appeared in the films “Battle of the Sexes,” “I Smile Back” and “Something About Mary.” 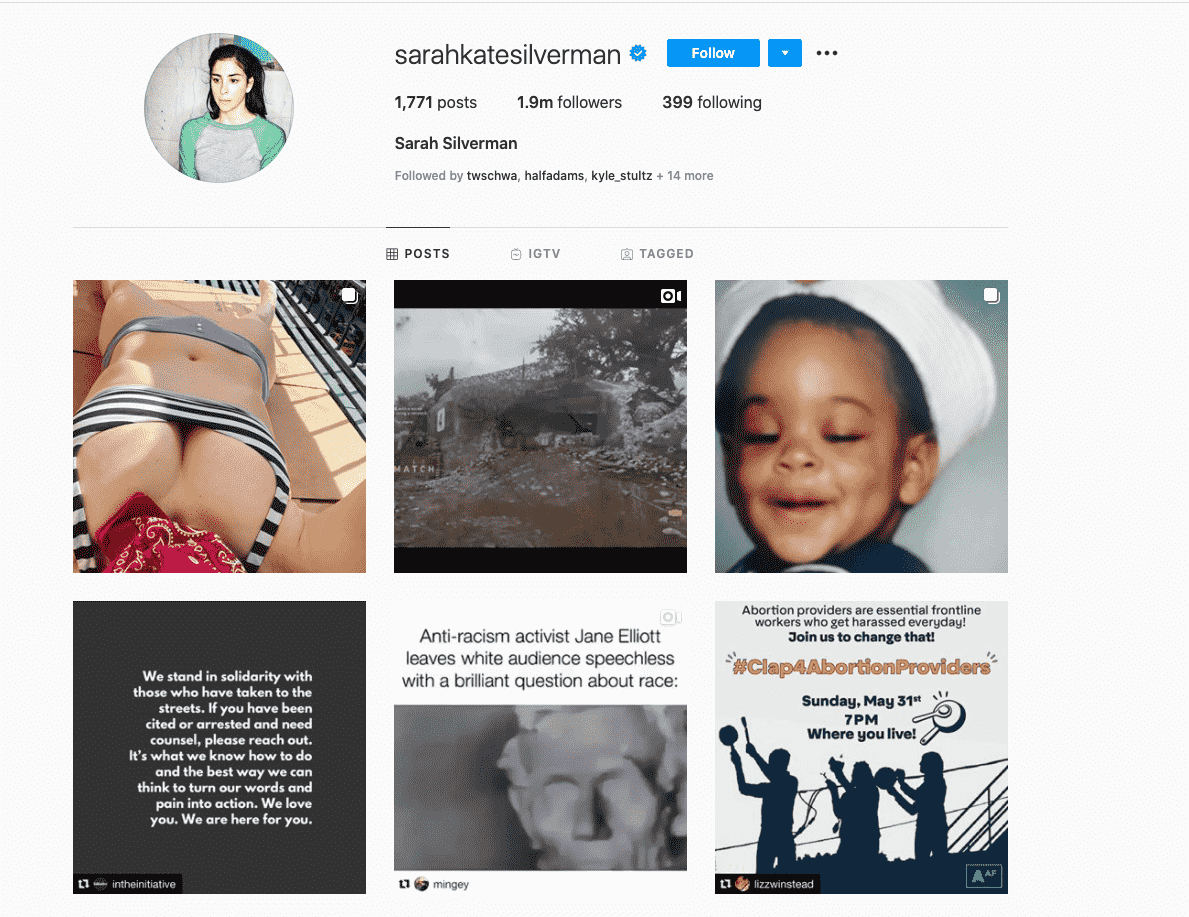 The former cast member of NBC’s “Saturday Night Live,” comedian, writer, and actress Leslie Jones has 1.3 million followers on Instagram. Jones, who starred in the films “Ghostbusters” and “Masterminds,” appears in the Netflix special “Time Machine.” She will host the revival of the classic game show “Supermarket Sweep” on ABC. Jones has appeared on the cover of Elle magazine’s Women in Comedy issue and has partnered with brands including Allstate and Oculus Go. 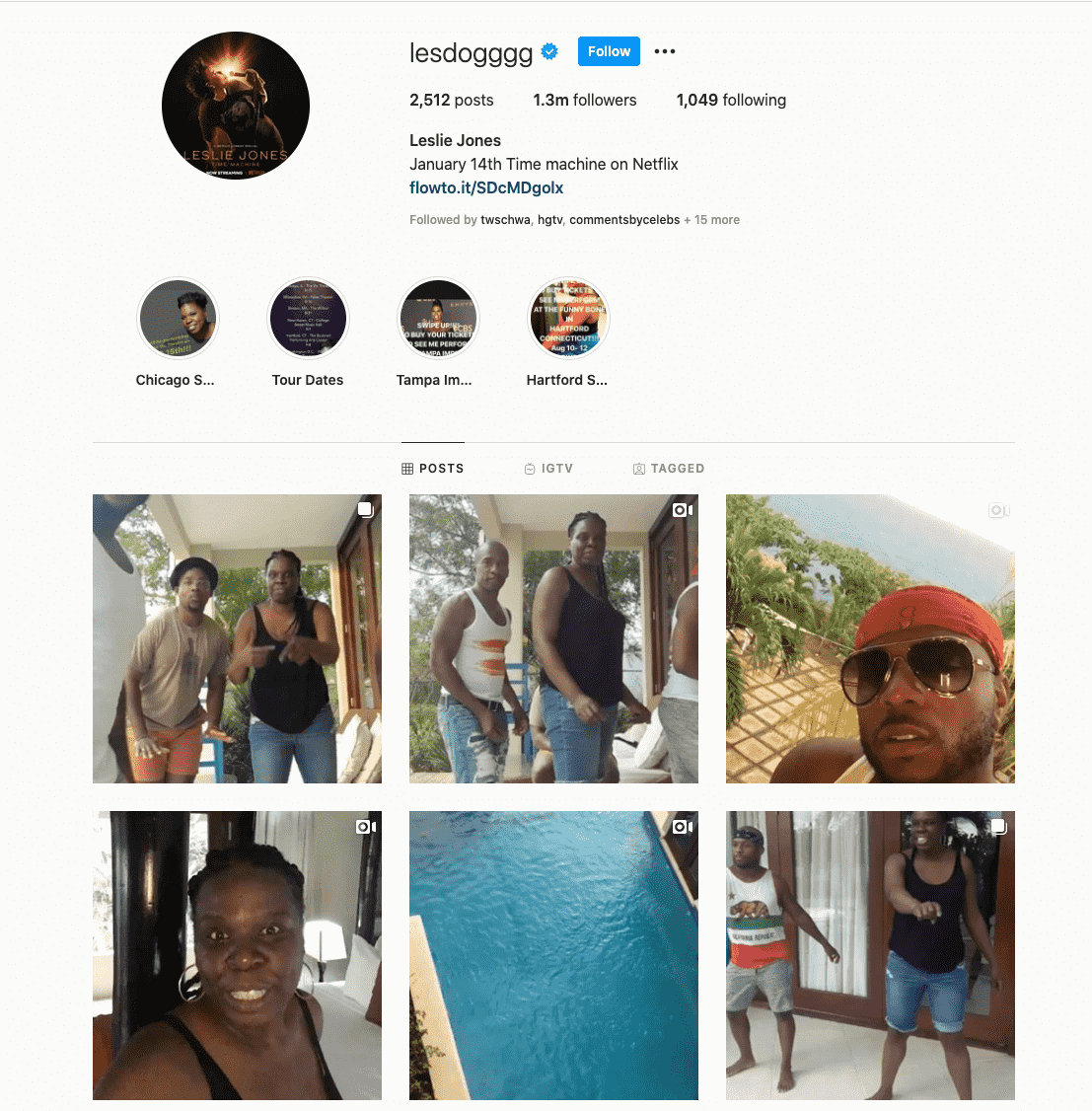 As more and more female comedians are drawing big audiences for their movies, podcasts, and TV shows, savvy brands are partnering with them on marketing campaigns. These famous funny women are attracting big followings on social media channels, especially Instagram.

Brands are collaborating with top women comedian influencers to reach both mass and niche markets. They’re working with them to promote products ranging from credit cards, insurance, and electronics to hotel booking sites, yogurt, and beauty products. Brands and marketers can find more influencers like this at IZEAx Discovery.