Hit enter to search or ESC to close
CommunityInfluencer Marketing

The Influencers Behind ConAgra’s Cooking Challenge

ConAgra launched a campaign to encourage millennials to hit the pause button on drive-thru breakfasts, pizza delivery and Chinese takeout.

Instead, the brand issued a challenge to millennials to “cook in” for one week. Participants made meals in their own kitchens, rather than having them served or delivered in the #GreatAmericanCookInChallenge.

To promote this unique challenge, ConAgra reached out to social influencers to spread the word as part of an influencer marketing campaign.

Here’s a look at some of the influencers chosen, and why they’re a good promotional pick for the campaign.

Her blog, Walking in Memphis in High Heels, is full of fashion tips for trendy moms looking for a good deal, as well as the latest baby gadgets new parents might find helpful.

Her target audience is likely moms with similar passions, which hits the ConAgra demographic to a tee. The campaign targets mature millennials, around 30 years old, who see the value in cooking in – not just for the health benefits, but also for the cost savings.

Boswell’s Instagram account supports the same demographic, and with 37,000+ followers she has the attention of a solid group of people.

She took part in ConAgra’s challenge and shared this shot of a meal she prepared on a weeknight: 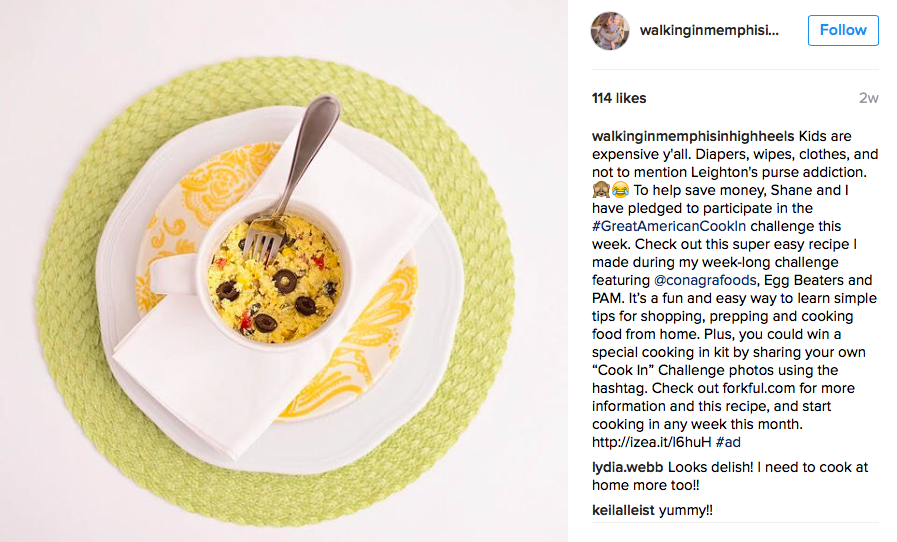 She encouraged others to take part in the challenge and even promotes Forkful.com, the ConAgra website that’s full of easy, DIY recipes.

Smith, like Boswell, has a solid blogging and Instagram presence that aligns with the target market that ConAgra sought for its campaign.

Smith is a mother of three and talks openly about her struggle to lose weight after having her children. She’s lost 100 pounds so far, and considers making smart food choices one of the keys to her success.

When Smith told her 72,000+ Instagram followers that she was taking part in the ConAgra Cook In Challenge, her post fit naturally among others that showed healthy meals and training exercises.

Smith used Forkful.com to find a healthy breakfast alternative to her usual shake. She snapped a picture of it, with a few products in the background, and promoted the challenge on Instagram. 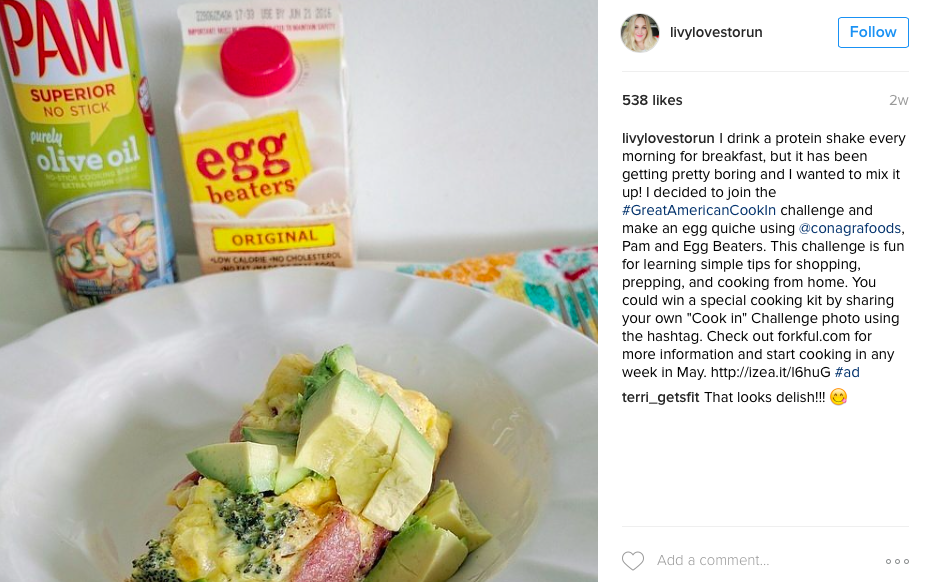 Both influencers have a modest following, but they align with ConAgra’s demographic and mission.

It’s important for brands that are considering an influencer marketing campaign to spend time on the front end of the campaign researching influencers that are the right fit.

In this case, the brand targeted a certain demographic, but also a certain persona. They wanted relatable influencers who could compel an audience of like-minded women to try some new recipes in their own kitchen rather than reaching for the takeout menu.