The list of top female Twitch streamers is one that can change quickly in the mercurial world of online gaming and streaming. During its early days, Twitch was a platform dominated by male streamers. But, female Twitch streamers are now a force to be reckoned with. And for good reason: According to the Entertainment Software Association, women now comprise 46% of the gaming population.

It’s not easy, though, as female Twitch streamers often endure online misogyny and harassment from trolls as they compete playing video games like Valorant and Minecraft. But that hasn’t deterred the streamers, their fans, and followers or the brands they partner with on Twitch marketing campaigns.

Many female Twitch streamers are triple threats, with impressive numbers of followers and subscribers on Instagram and YouTube as well. And their follower and subscriber numbers and high levels of engagement have attracted the attention of brands ranging from M.A.C. to Geico.

Consider these top female Twitch streamers for brands and marketers to know. 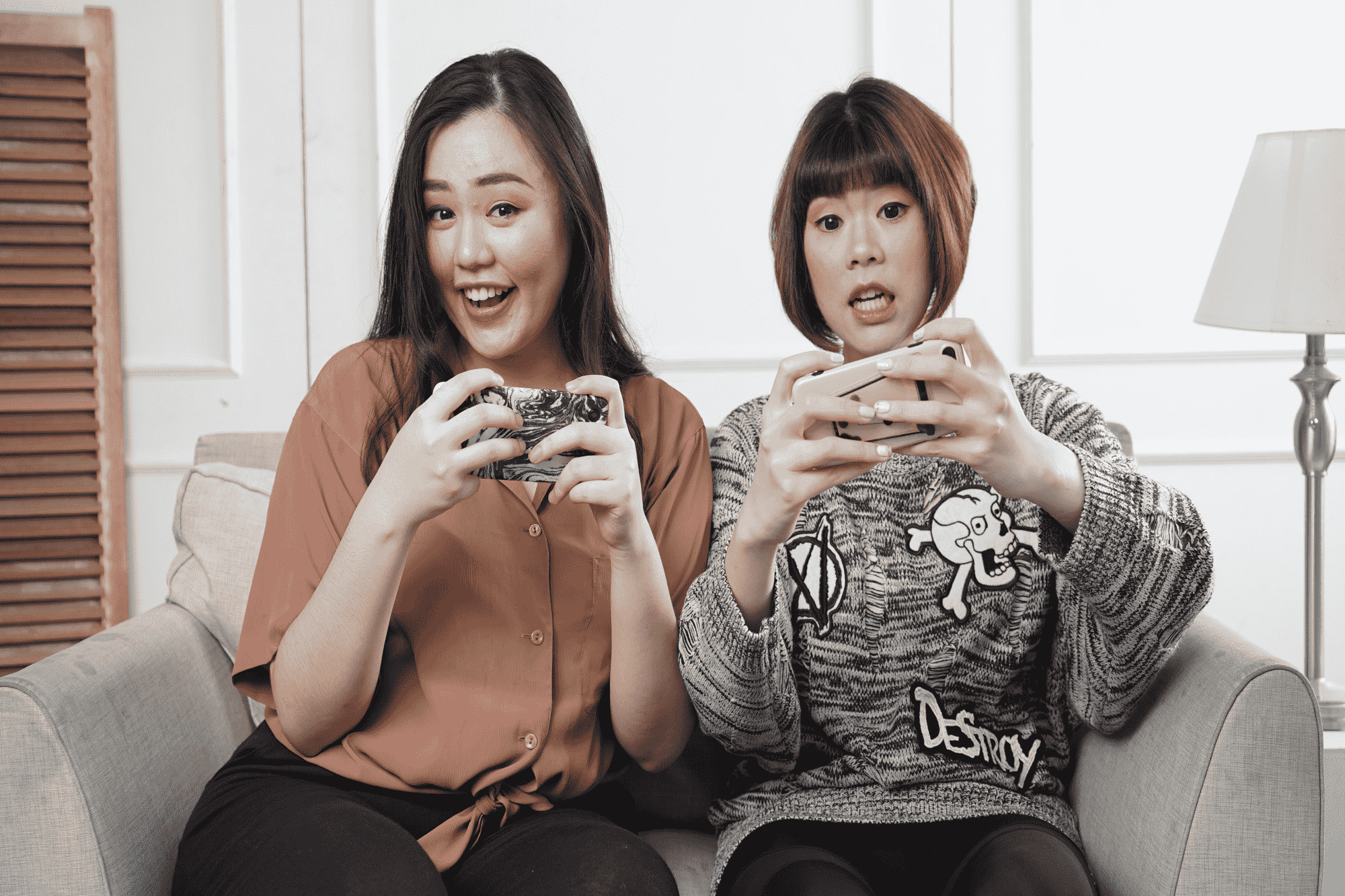 Imane Anys is one of the top professional female Twitch streamers. The Moroccan-born Canadian is known for playing video games such as Valorant and Just Chatting, streaming them on Twitch. Additionally, she engages in the viral Korean video trend of “mukbang,” which involves consuming meals during her videos. She’s known for her upbeat personality and her focus on having a good time with her viewers.

She also streams her travels to global destinations and her duets with other female Twitch streamers, including LilyPichu. Pokimane has received numerous awards and was even crowned Best Twitch Streamer of the year at the Shorty Awards.

Kaitlyn Siragusa streams about a variety of topics, including cooking and exercising, and she’s also a professional cosplayer. Siragusa takes a light-hearted approach to streaming and doesn’t take herself too seriously. She is also known for her swimming pool streams and her Just Chatting videos, in which she sometimes appears wearing cat ears.

Siragusa shows no hesitation in streaming her kooky, tuneless duets with Internet personalities like TayZonday and Gloopdawg. Siragusa is based in Houston, Texas, and has been suspended from Twitch several times. 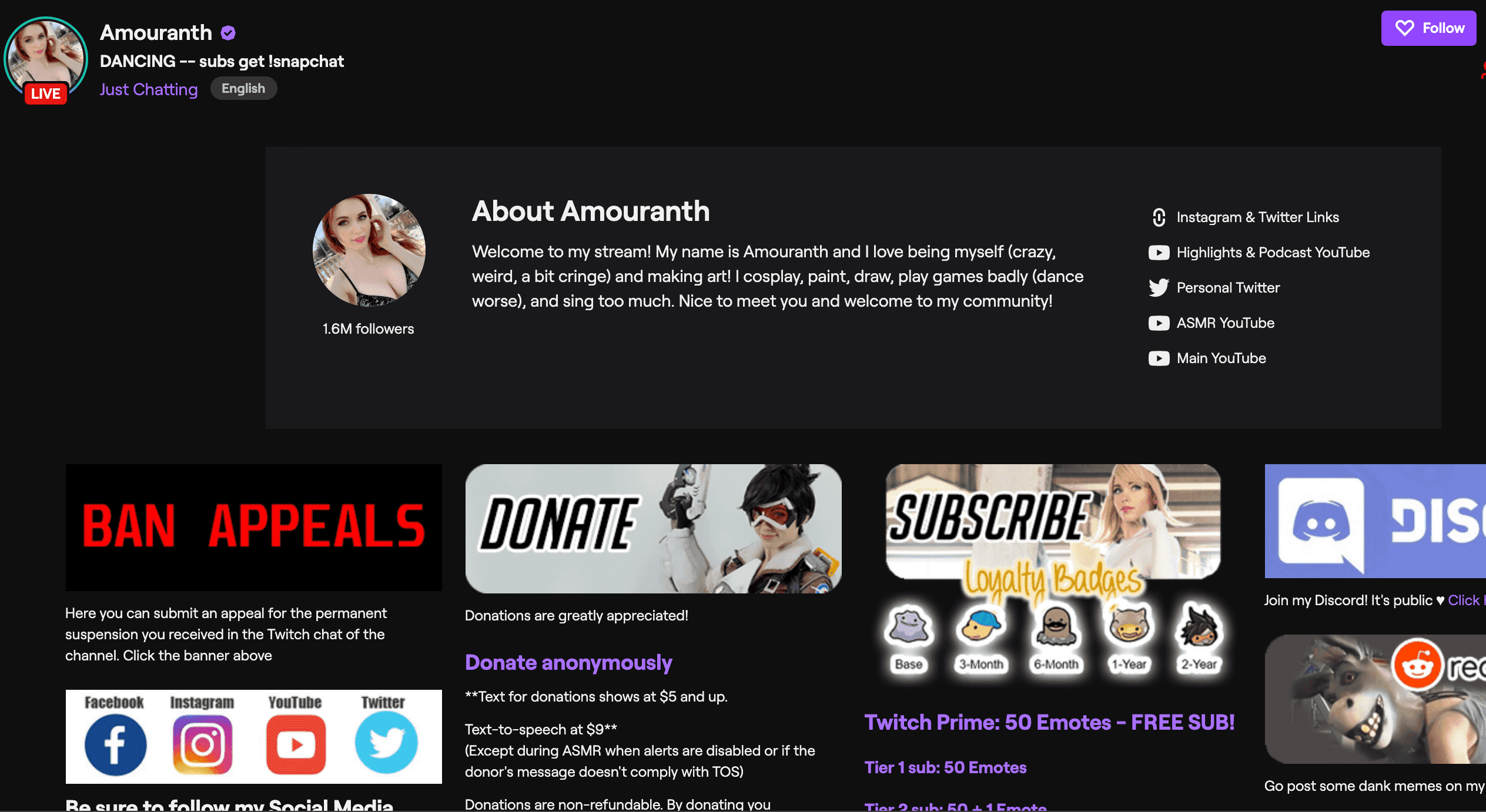 Alonso is a Spanish-language streamer based in Mexico. She’s known for streaming tutorials of video games, including Minecraft and Overwatch, and for her Just Chatting videos. Alonso is active on social media, particularly on her Instagram account, where she regularly posts Stories. When she’s not streaming on Twitch, you’ll find her going live on Facebook Gaming. 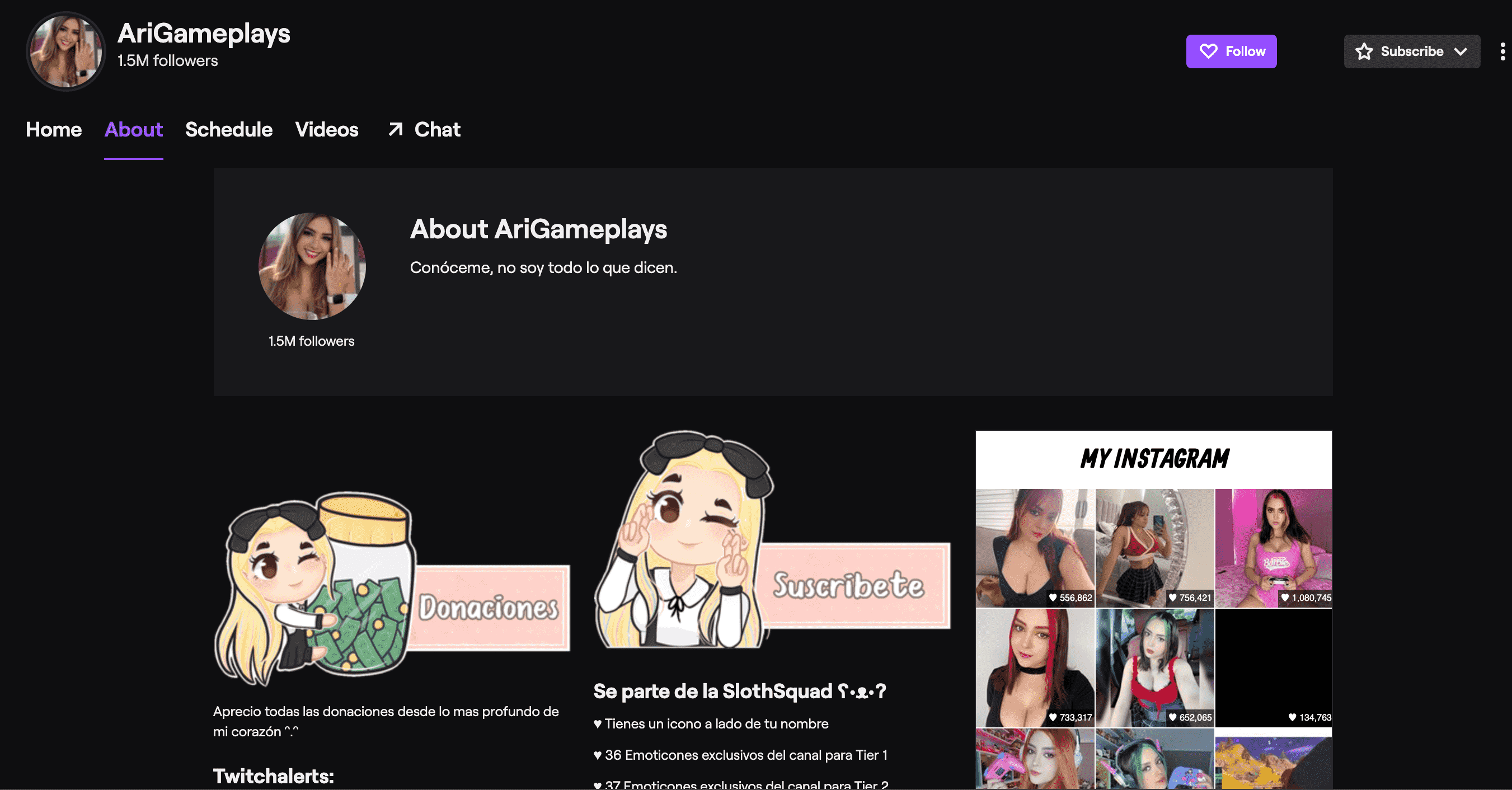 Streamer Rachell Hofstetter is known for playing combat- and battle-themed video games like Fortnite and Dark Souls III with intense focus. She’s also famous for streaming Hunting Rifle Kill and Tag videos. She was one of the competitors in the Fortnite Pro Am at the 2019 Electronic Entertainment Expo and is a member of the 100 Thieves team on Twitch. 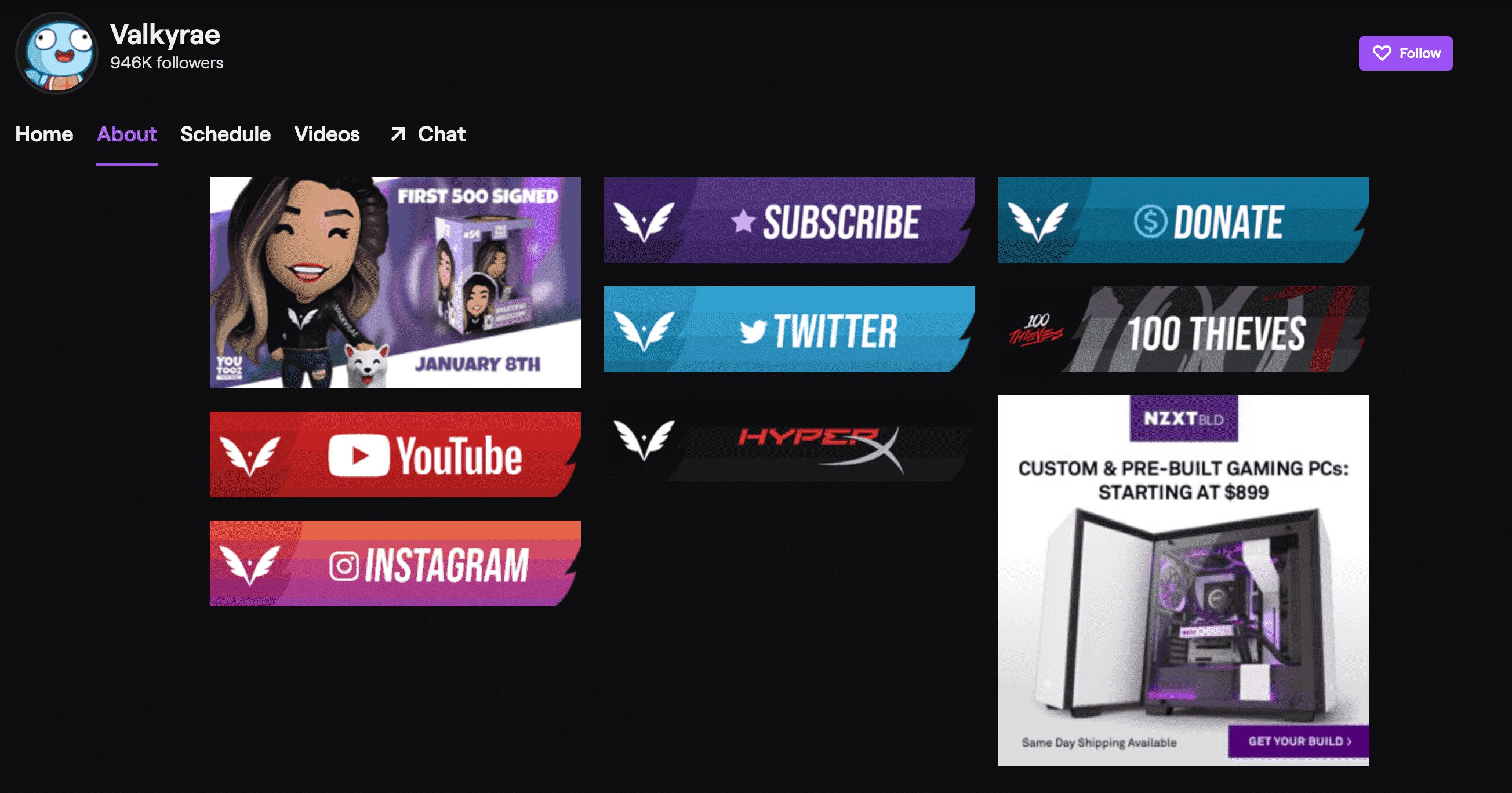 Female Twitch streamer LilyPichu has gained attention and followers for playing video games including Minecraft and League of Legends, and for her Just Chatting videos. She’s also an artist and a pianist. Her personality as it comes across in her streams is positive and encouraging, and her Twitch homepage features cute illustrations of cats. 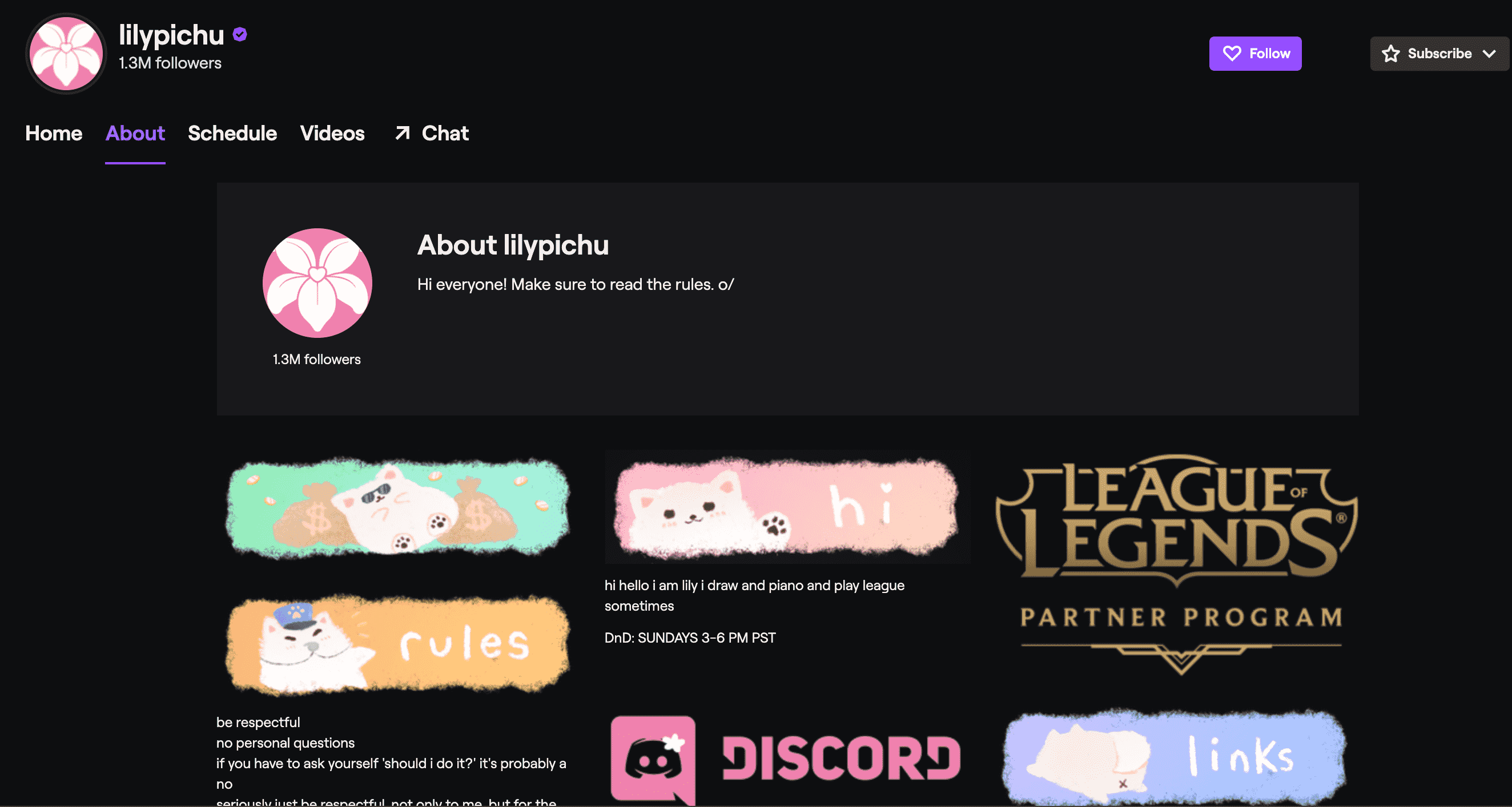 Streamer and vlogger Olivia, also known as Loeya, is based in Sweden. She’s known for her skill at playing video games, including Minecraft and Fortnite, which she tackles aggressively. In addition to Twitch streaming, Loeya also has a presence on YouTube. While mainly game-focused, her YouTube videos also incorporate glimpses into her daily life. 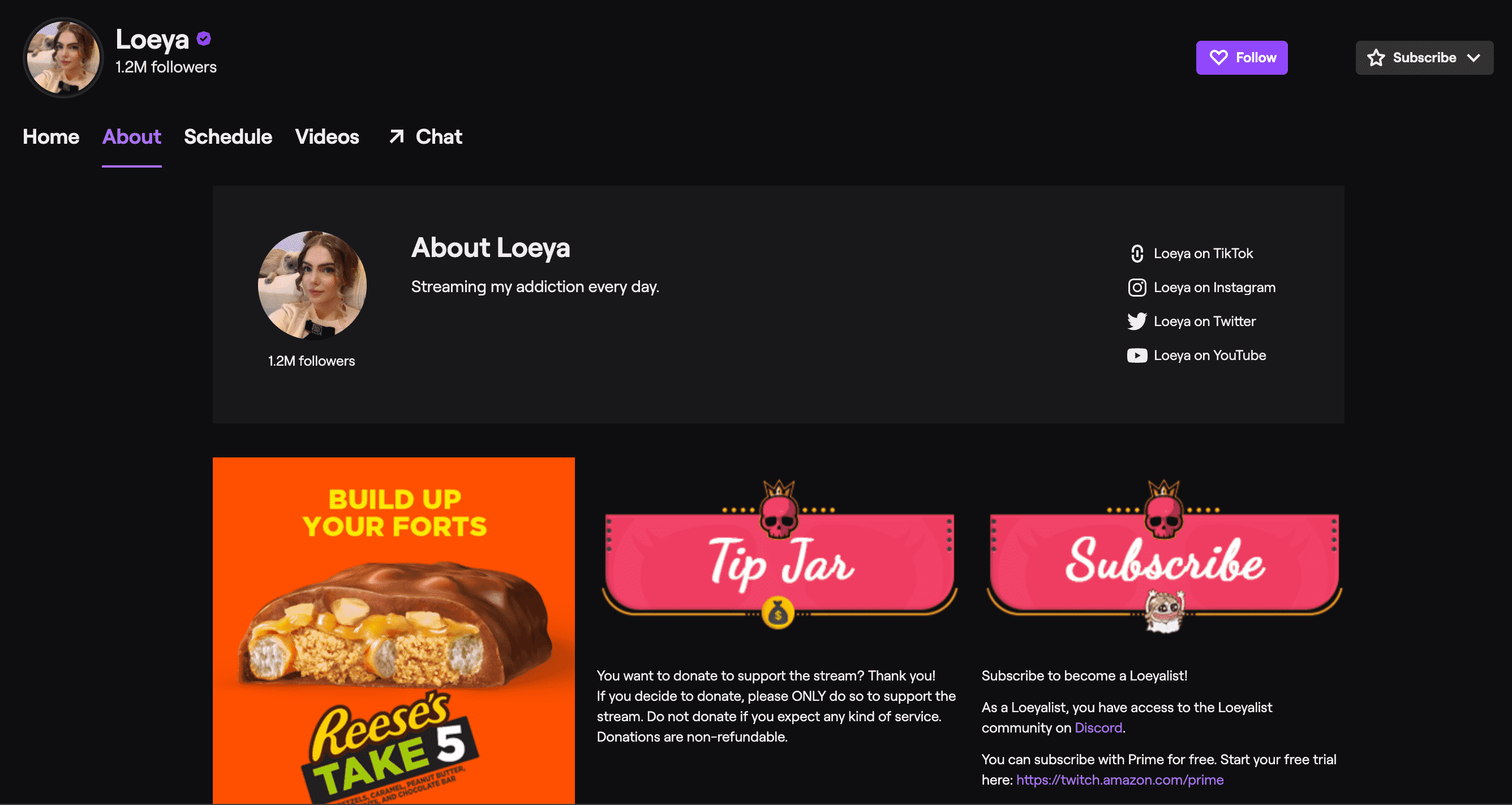 Canadian streamer Sonja Reid engages with her followers as she plays video games like Animal Crossing: New Horizons, Counter-Strike: Global Offensive, Minecraft and League of Legends. She also hosts fellow gamers on her Twitch channel. She runs her channel as a full-time job and was once the most-followed female streamer on the platform. 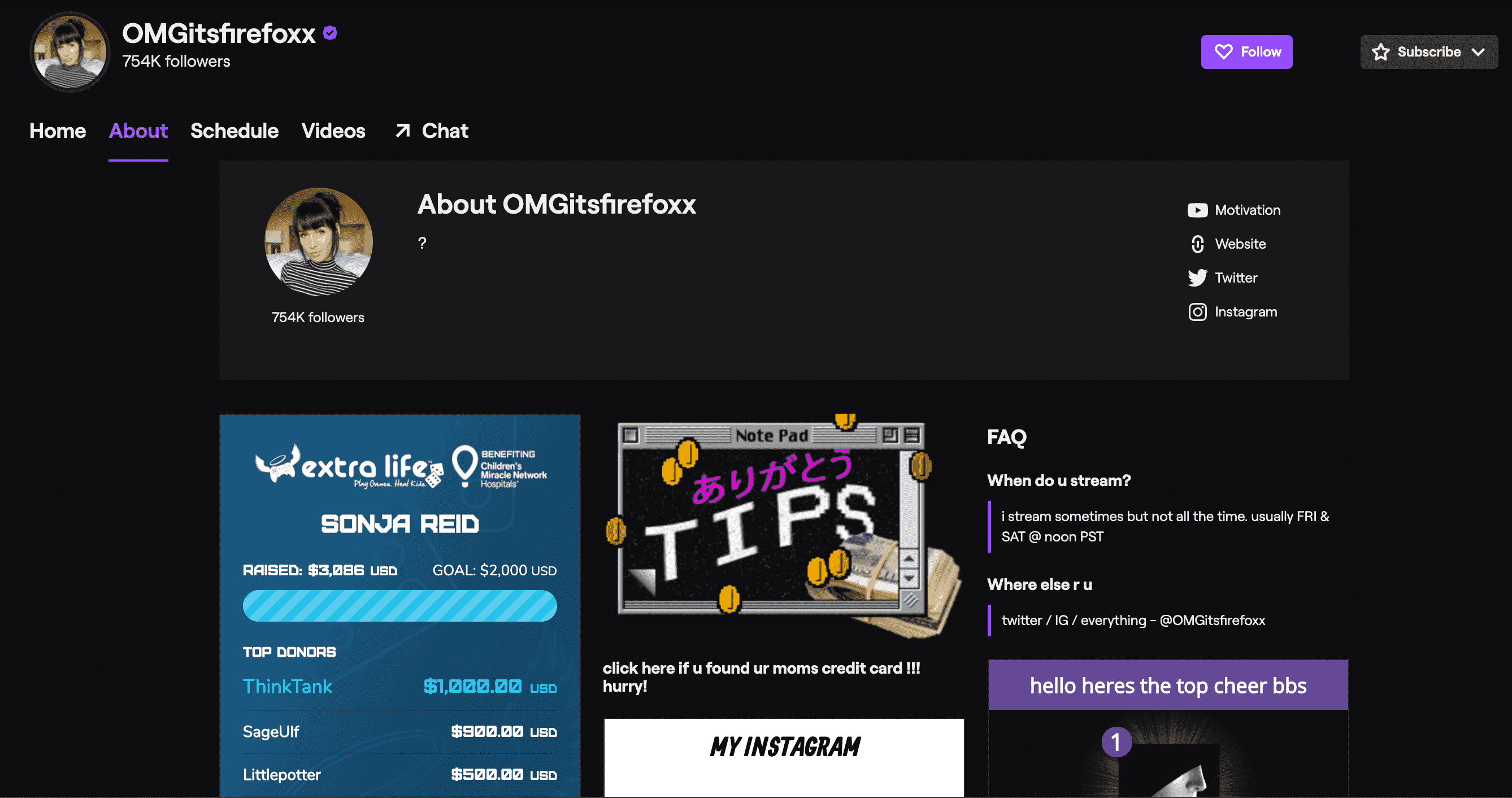 Missouri-based streamer and professional gamer Kaceytron is known for playing various Minecraft, Animal Crossing, and Pokemon titles. She’s also famous on Twitch for her Just Chatting videos, which feature her engaging in everyday activities like flying a kite and driving her car. She’s a member of the Grand National Champions team on Twitch. 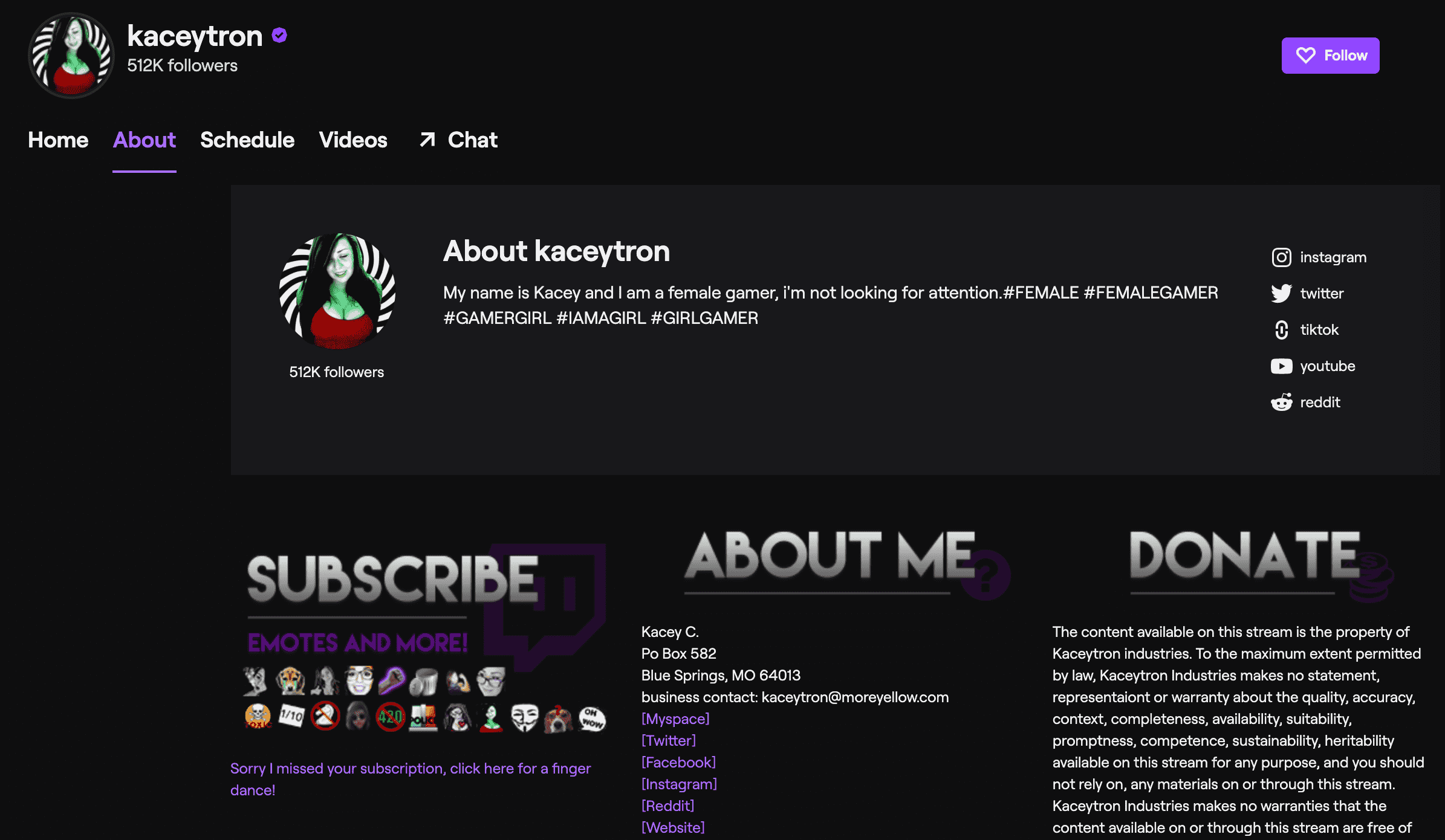 Streamer Kelsie Pelling, aka KayPeaLol, attracts viewers for her skill at playing League of Legends and Valorant. Although Pelling is serious about eSports, she also infuses her streams with her own style of humor and a healthy dose of salty language. 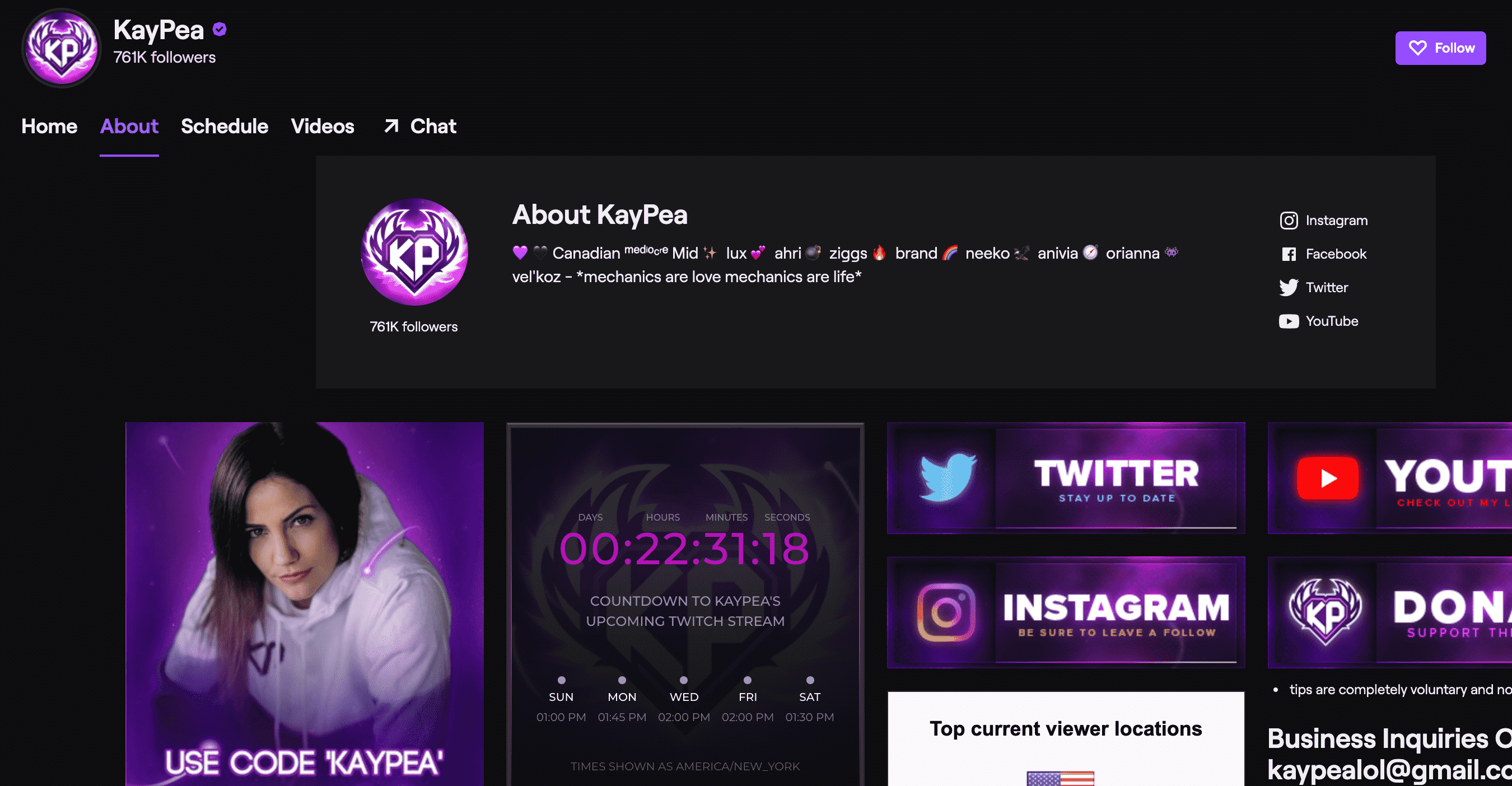 Streamer Julia Kreuzer is known for streaming herself playing Counter-strike: Global Offensive and League of Legends. The Austrian influencer is also followed for her Just Chatting streams and for playing Golf With Friends. But her versatility doesn’t stop there. She’s created Food and Drink videos of herself baking items like rainbow cake and rainbow pizza and has also streamed makeup tutorial videos. 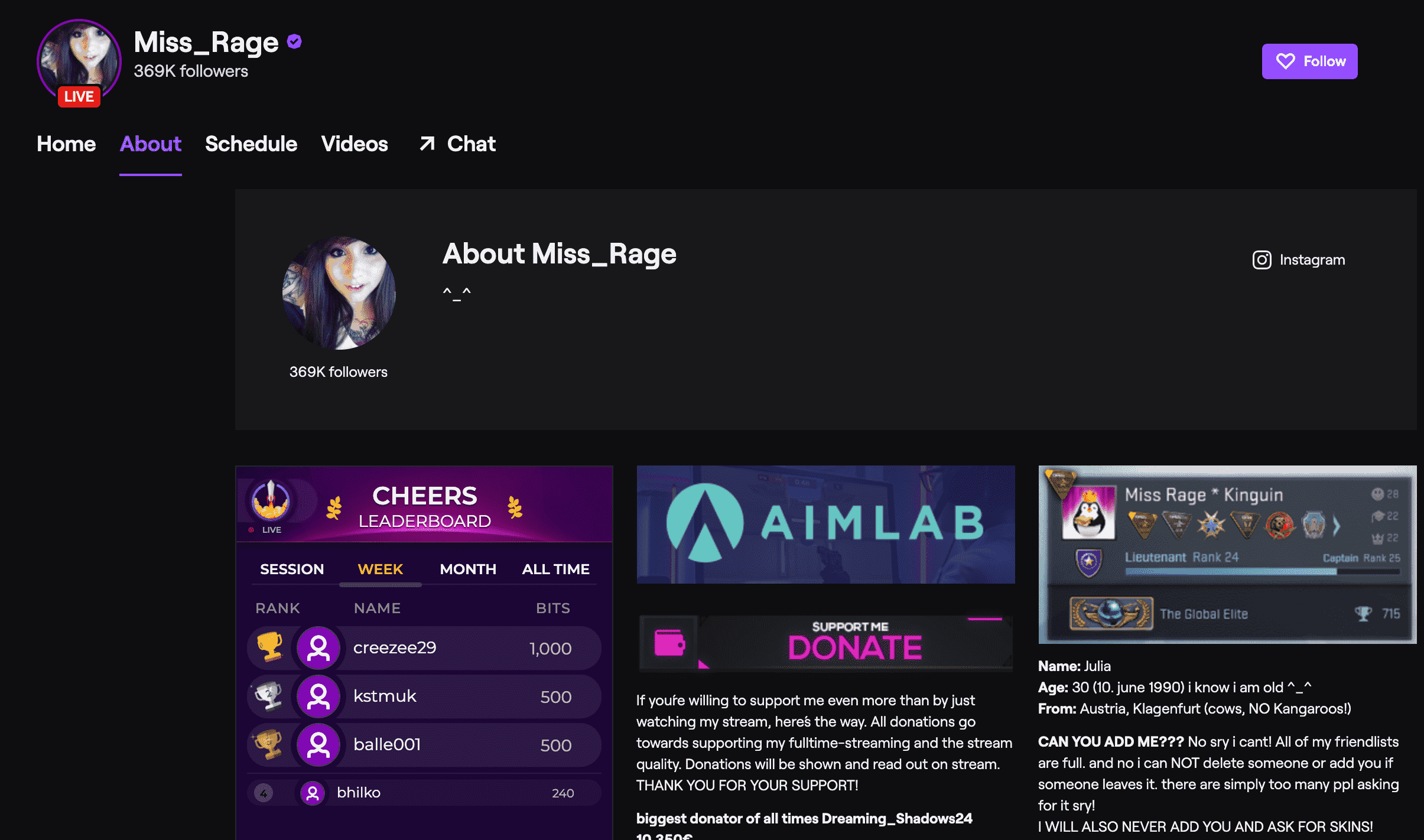 Streamer Alexia Raye plays Fortnite and Animal Crossing: New Horizons and streams Just Chatting videos. Her relaxed, down-to-Earth personality is fully on display during her streams. Raye comes across as the girl next door as she chats about a variety of topics, ranging from her frustration with her hair to her attempts at organizing her tasks throughout the day. 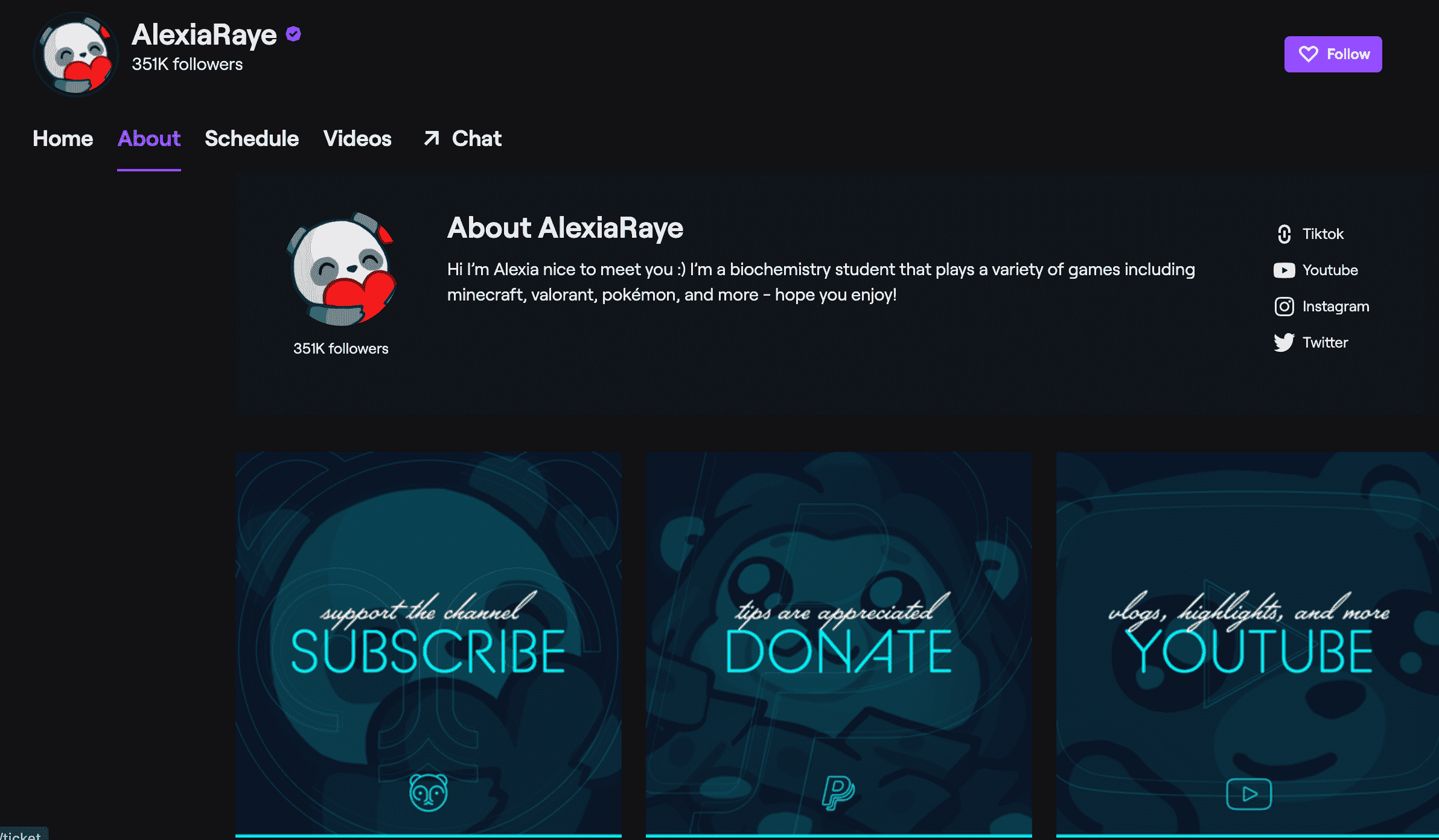 Streamer Lea May is known for streaming video games as well as for her Just Chatting videos. Her laid-back personality comes through in her streams, which frequently include Twitch Sings videos. She often discusses timely, engaging topics and has recently been addressing COVID-19 quarantining and related isolation. 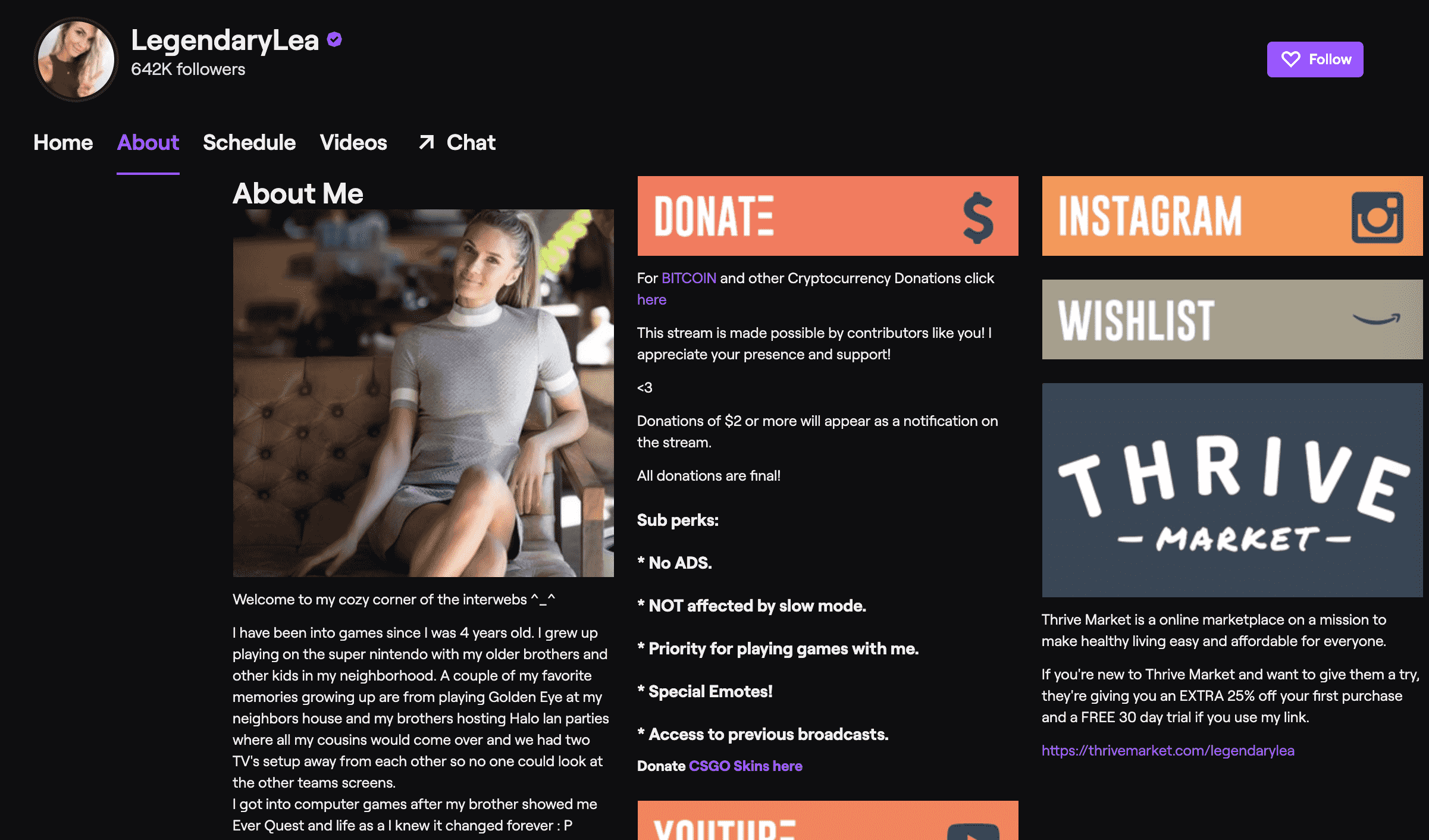 Los Angeles-based Australian streamer Chelsea Morello has gained followers for her aptitude at playing video games, such as Valorant, Call of Duty: Modern Warfare, and Fortnite. Morello has attracted coverage in Australian media, including in the Sydney Morning Herald and on 60 Minutes Australia. She features ads for a variety of brands on her Twitch homepage. 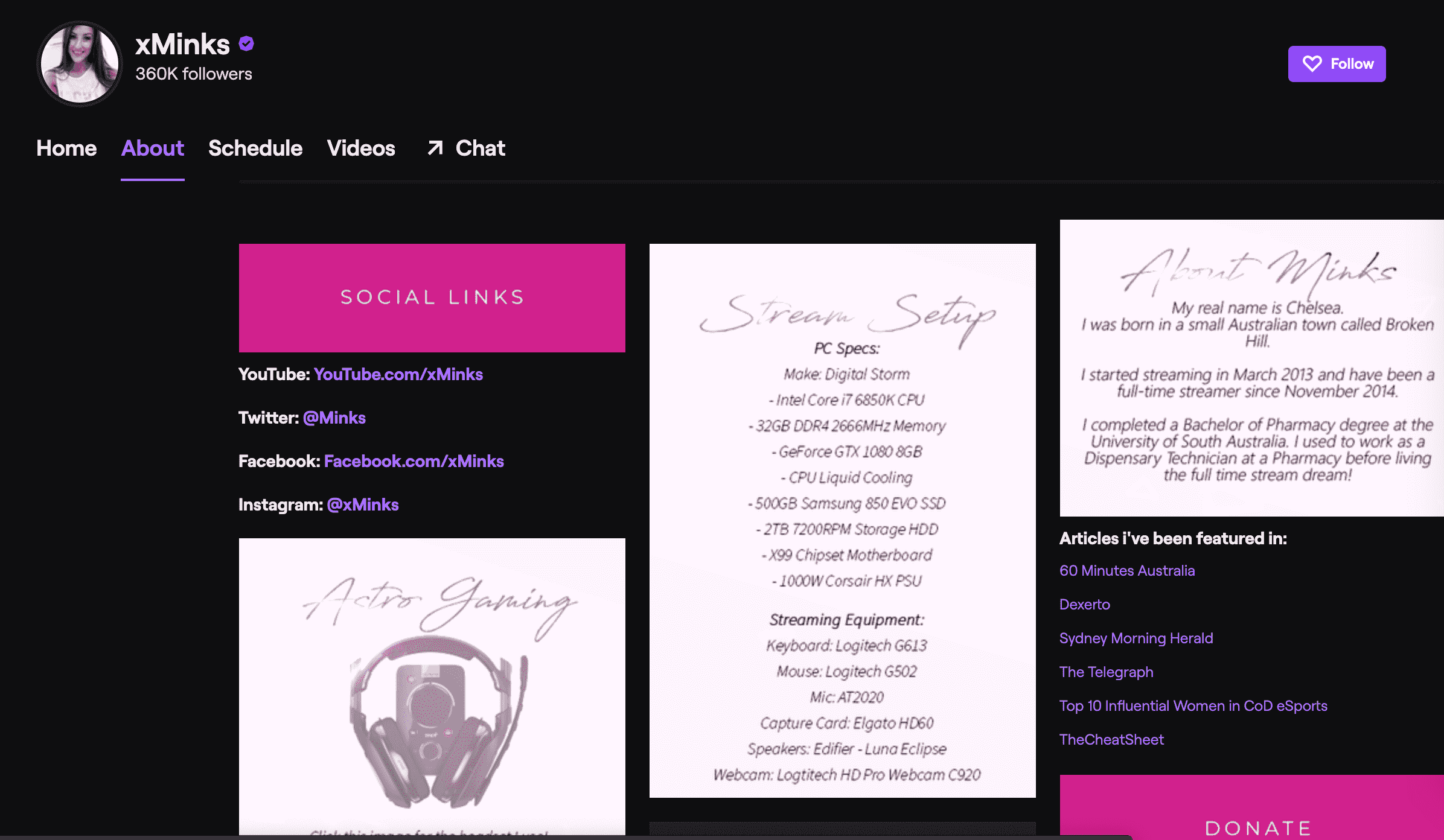 California-based streamer, gamer, and singer Lesli Fu is known for playing Overwatch, League of Legends, and Animal Crossing. She often streams from her pink-hued bedroom, sometimes wearing pink clothing and accessories as she chats warmly with her viewers. Fu’s streams also feature her singing her own versions of popular songs and discussing music. Her streams sometimes show her preparing food and spending time talking and eating with friends. 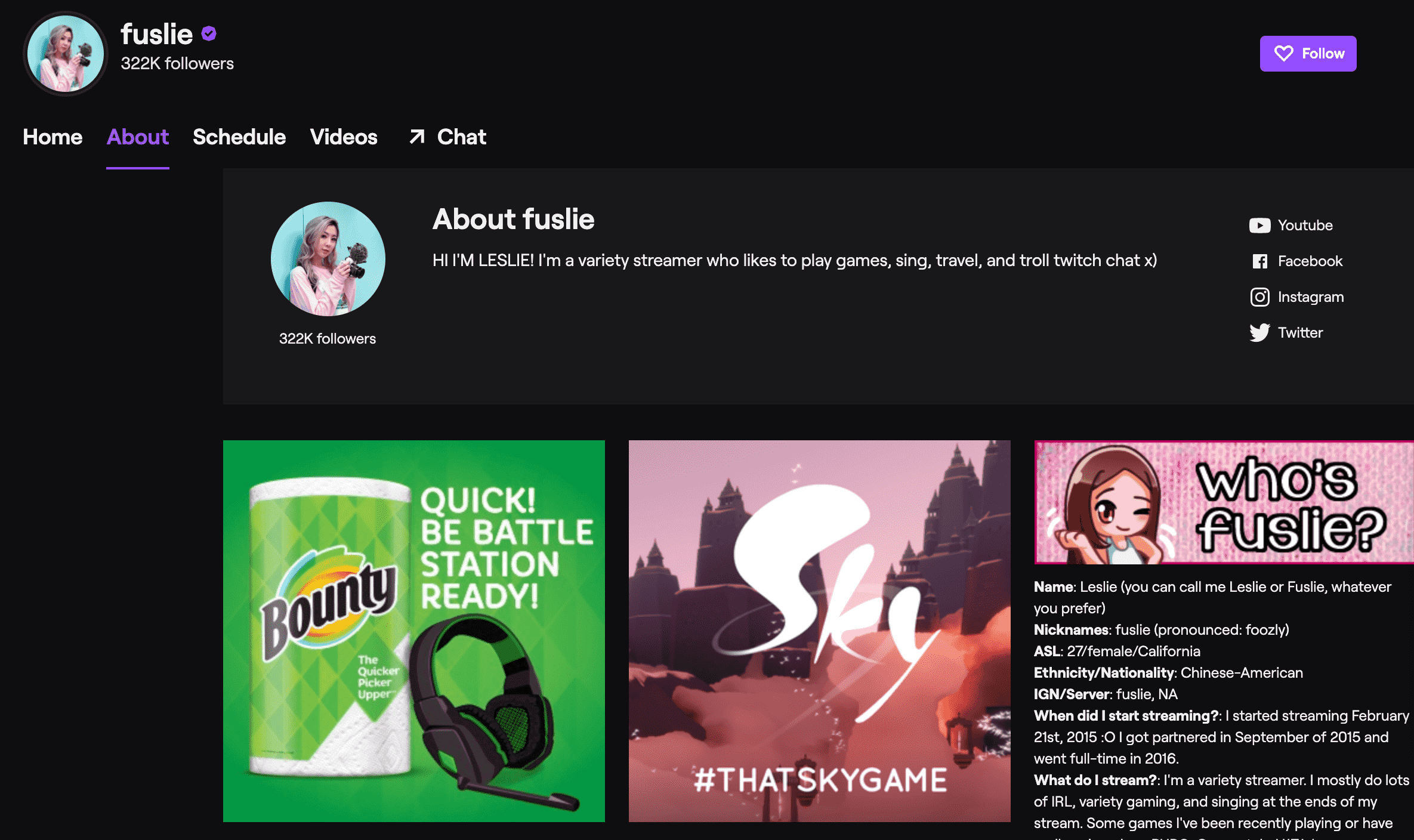 QTCinderella is a gamer and a cosplayer. In addition to cosplay and video games, she streams about a variety of topics. Her baking and cake-decorating streams have shown her making items like the cake from Super Mario Brothers 64. 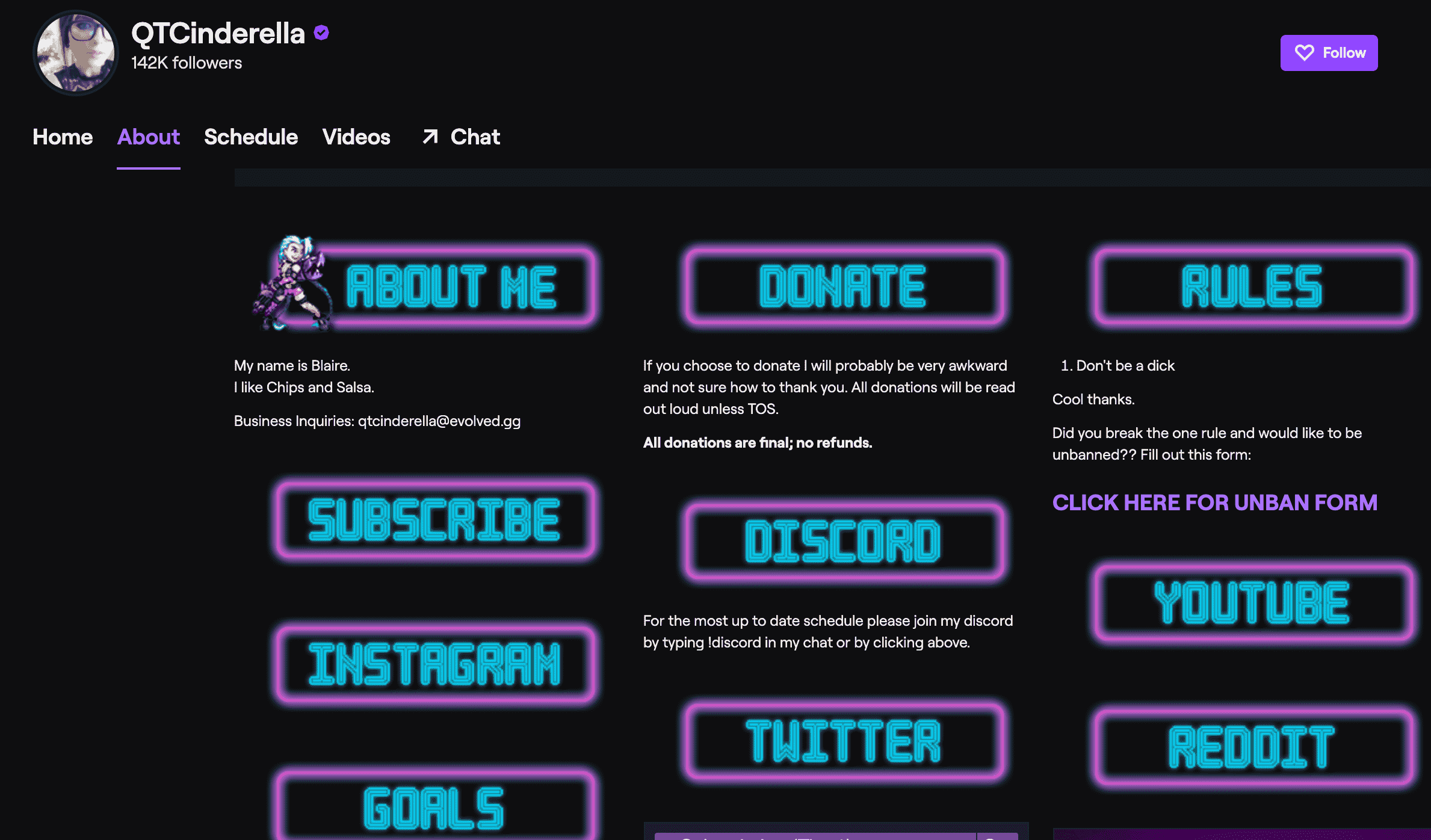 They range from up-and-coming streamers with rapidly growing numbers of followers to those who are well established. While some focus almost exclusively on gaming, others stream about a variety of topics. Brands and marketers can find more influencers like these with IZEAx Discovery. 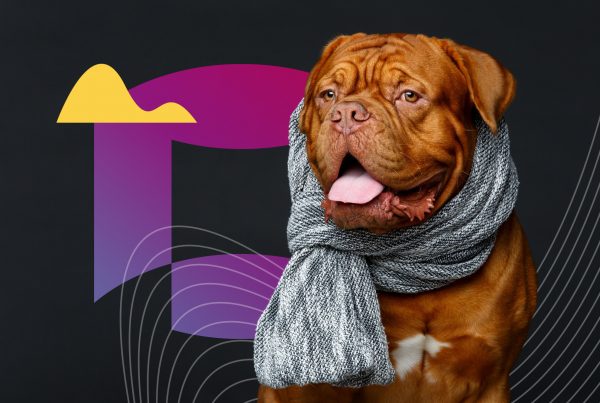