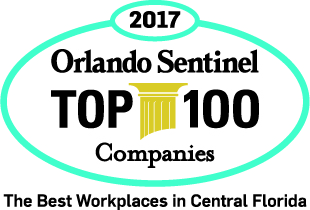 This survey and award program was designed to identify, recognize and honor the best places of employment in Central Florida, benefiting the region’s economy, its work force and businesses.

To be considered for participation, companies had to fulfill the following eligibility requirements:

Organizations from across Central Florida entered the two-part survey process to determine the Orlando Sentinel Top 100 Companies. The first part consisted of evaluating each nominated company’s workplace policies, practices, philosophy, systems and demographics. The second part consisted of an employee survey to measure the employee experience. The combined scores determined the top organizations and the final ranking. Best Companies Group managed the overall registration, survey and analysis process and determined the final rankings.

“We are honored to be recognized for the second consecutive year by the Orlando Sentinel as a high ranking employer,” said Ted Murphy, Chairman and Chief Executive Officer of IZEA. “Our future success depends on our ability to attract and retain top talent. We will continue to invest in our people and culture to create the best work environment we can for our team members.”

Public announcement of the list and rankings of the second annual Orlando Sentinel Top 100 Companies program was published in the Orlando Sentinel on August 20, 2017 and an event was held for all list-making companies on August 18, 2017.