Twitter is a fantastic place to promote a brand, but improving visibility in a crowded market means making good use of hashtags. Twitter posts with popular Twitter hashtags enjoy 12 times higher engagement than posts without hashtags, according to research by HubSpot. It is important to do your homework and find the tags that serve your brand. But which are the most popular Twitter hashtags? 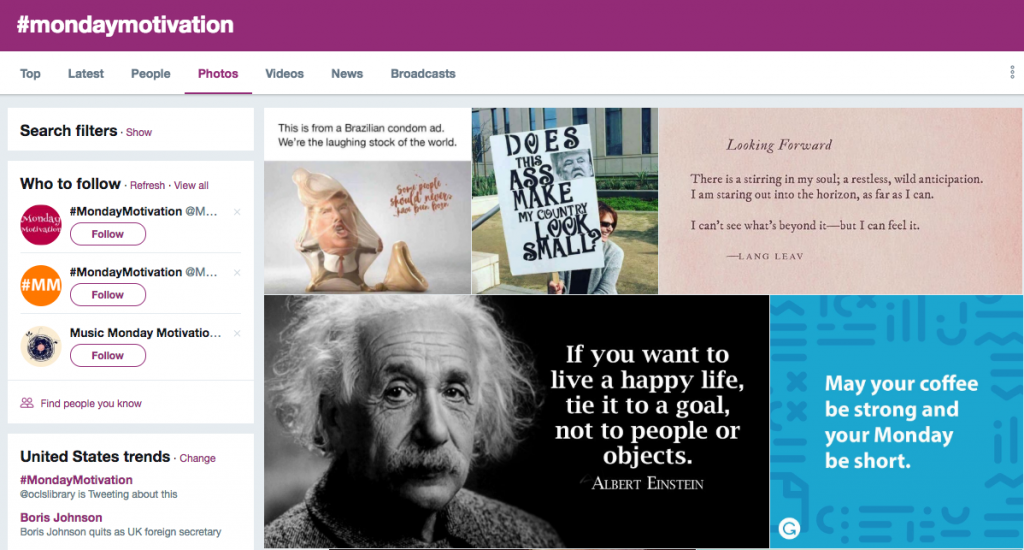 Some hashtags are popular for a short period of time, due to seasonal trends or fads. Others are always popular due to their wide-reaching subject matter and appeal. The following 25 hashtags were popular throughout the first few months of 2018. Some represent trends, while others have longer-lasting usefulness.

Why Are Some Hashtags So Popular?

There are many different reasons why hashtags become popular. It’s important to understand those reasons to ensure you’re using the best options for your own content marketing strategy.

Some hashtags represent subjects that are always popular. Social media represents an opportunity for people to spread positivity through tags such as #thankful or to share their personality and lust for life through tags such as #selfie or #funny.  Specific hashtags also allows people to take advantage of a platform for sharing their art using tags such as #art or #photography. Someone somewhere is enjoying a birthday every second of the day, so #happybirthday is another common hashtag.

New fashions, the latest tech, and breakthroughs in medicine or science often result in trending hashtags. Trending hashtags may soar high for a few weeks or months before losing their appeal. For example, in 2018, cryptocurrencies are a hot topic, so #ico, #bitcoin, and #crypto gained a lot of traction.

Many hashtags trend at particular times of the year. Some relate to holidays, such as #merrychristmas. Others relate to seasonal trends, such as health hashtags gaining traction at the beginning of the year when people make resolutions to get in shape.

Gaining a large following is a goal for social media influencers, businesses, and general users. For anyone just starting out, there are several tags to help build an audience. Common examples are #followfriday (or #ff) and #followback, which make it clear that you will follow any Twitter users who start following you.

Marketers and influencers are always looking for ways to encourage engagement. Tags that ask people to like and share posts are always popular. Contests are a good way to promote posts, making tags such as #giveaway and #competition winners all year round. Companies are also looking for new revenue streams, making #crowdfunding a growing concern.

Why Are Hashtags Important?

While Facebook remains the dominant force in social media, with over 2.2 billion active users, Twitter is certainly no slouch. The micro-blogging site enjoys over 330 million active users. Those figures clearly highlight the importance of using social media as a tool for improving brand reach. If you produce quality content, you have an opportunity to serve it to a massive market of interested consumers, many of whom are high-income users with expendable cash. Unfortunately, the massive amount of content on Twitter makes it more difficult to be visible.

Hashtags are a useful way to improve visibility by flagging certain content so it turns up in searches. On Twitter, if you type a hashtag into the search bar, you get a list of popular tweets using that hashtag. Furthermore, if you click on a hashtag within a tweet, you get to the same search results. This makes it easier for users to find the kind of content they love. By using the most popular hashtags, you increase the number of impressions per post, increases the chances of developing an audience for your brand.

What Are the Disadvantages of Popular Hashtags?

Everybody is using them

Millions of people are using the most popular hashtags on a regular basis. If you’re using the same hashtags, you have the benefit of increased impressions, as your content appears in more search results. But there’s also a risk you won’t gain visibility, as your content might get lost in an overcrowded list.

You aren’t finding your niche

If you’re using generic, popular terms, you aren’t making the best use of hashtags, which is finding the specific market that your content appeals to. For example, if you specialize in wedding photography for pets, you really want to focus on building an audience through the use of a hashtag such as #weddingphotographyforpets, rather than the generic #photography. While the latter option exposes your work to more people, most of them won’t have an interest in your particular style.

The most popular hashtags may not be relevant to your business at all. You don’t want to use spam tactics that make your work appear where it isn’t relevant. In other words, if you’re using #competition to gain visibility, you need to make sure you’re running a competition.

You may build the wrong audience

Hashtags that encourage follow backs help you build an audience quickly. The problem is the audience you build isn’t really interested in what you’re selling. Make the aim of your content marketing to build engagement with an audience that truly cares about your brand.

You aren’t finding your own voice

The most popular Twitter hashtags may extend your reach, but they aren’t promoting your brand. The ultimate goal is to promote hashtags that relate specifically to your brand, such as Nike’s #justdoit. That way, when people search for those hashtags, they’re only going to find content relating to you.

Using popular Twitter hashtags has the potential to increase impressions, and to help your work turn up in feeds that extend beyond the traditional reach of your brand.  Significant disadvantages are to be consider. These disadvantages mean it’s important to develop a complete content marketing strategy that combines the use of popular, wide-reaching tags with tags that target your core demographic and promote your own brand voice.