Chicago is a major city with a personality all its own. It’s a beautiful city with amazing food, culture, and sports scenes, so it’s no surprise many influencers chose the city to call home. From major YouTube celebrities to micro influencers with a niche following, these top Chicago influencers have a big impact on the city and the world. Check out how they interact with their followers on social media. 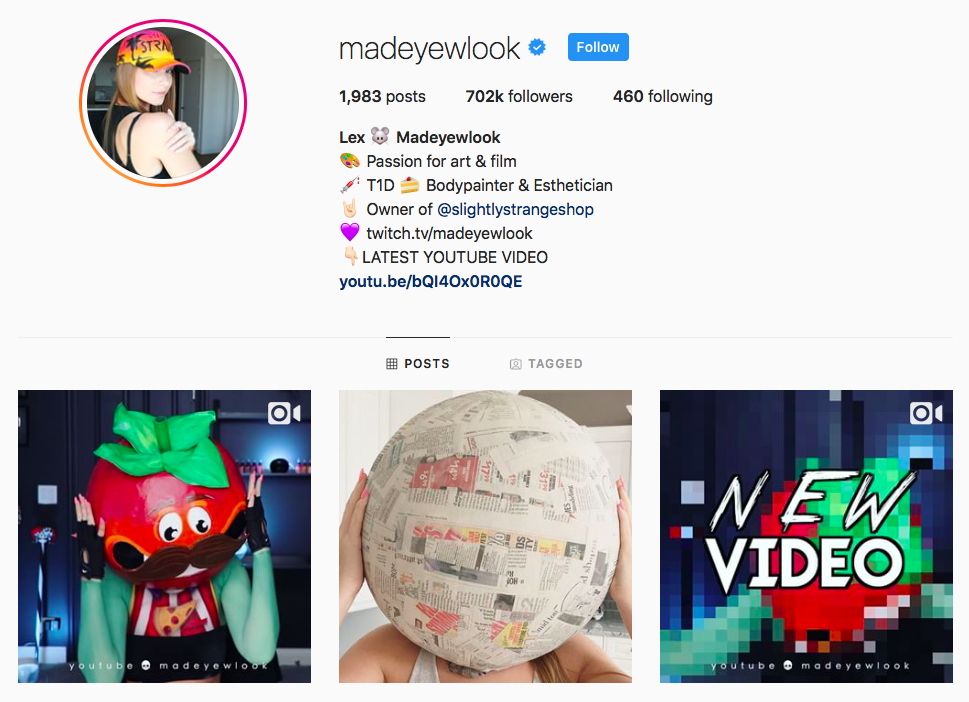 Known as MadeYewLook on social media, Alexys “Lex” Fleming is one of the top Chicago influencers with 2.6 million subscribers on YouTube and more than 701,000 followers on Instagram. She’s gained a large following by uploading body painting and costume makeup videos and photos to social media.

Rob Scallon is a Chicago-based musician and top Chicago influencer who shares his musical talents almost entirely on social media. His YouTube channel has over 1.4 million subscribers, and he uploads new content every week. He rarely plays live shows, but he’s a prominent Chicago influencer in the music scene. 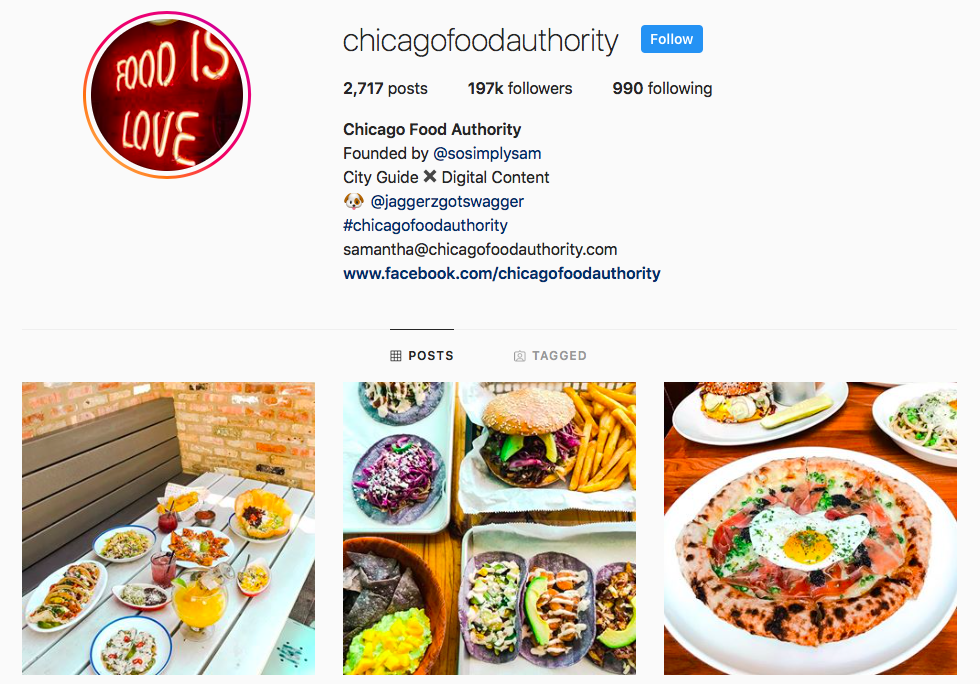 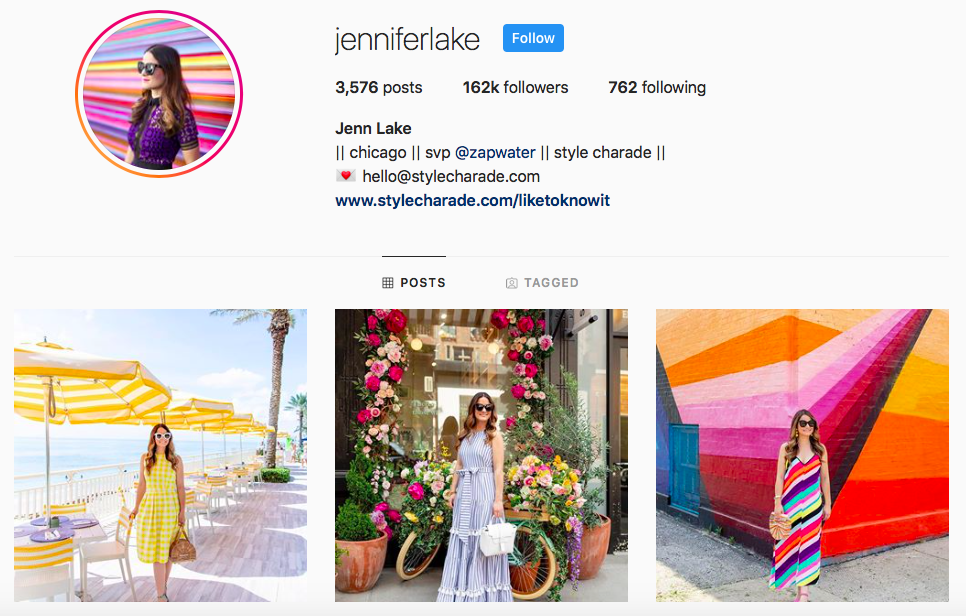 Jennifer Lake is a fashion influencer and top Chicago influencer who uses the beautiful backdrop of the city to model her outfits. Her Instagram photos pop with color and show off her unique style. More than 162,000 people follow her on Instagram to see her fashions. 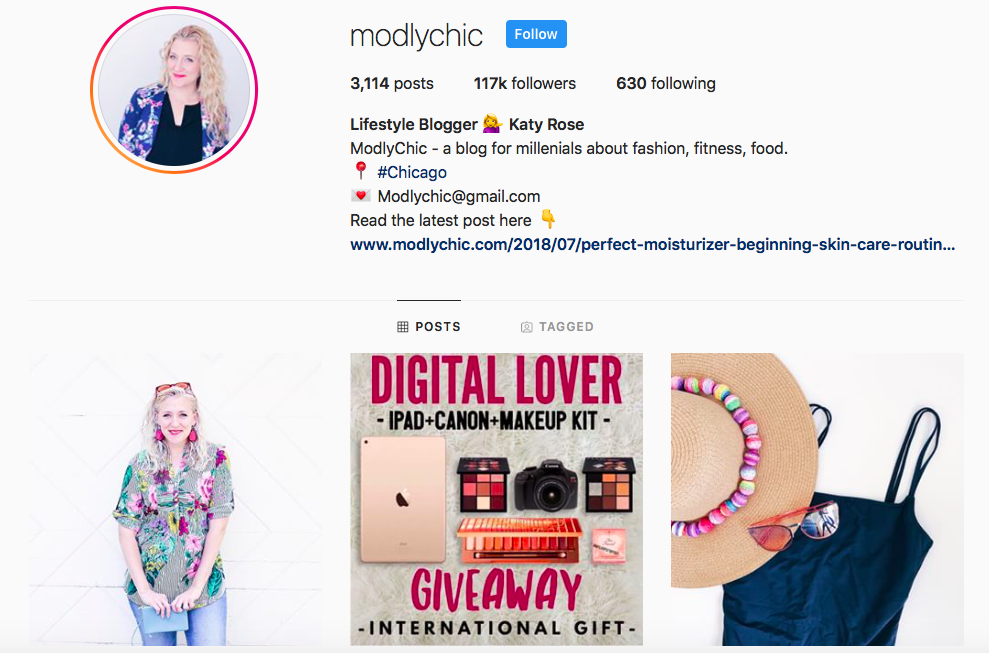 Katy Rose operates the lifestyle blog Modly Chic. She’s one of the top Chicago influencers whose feed features photos of food, drink, beauty, fashion, and more. She has a following of more than 116,000 people on Instagram where she shares her life in a relatable way. 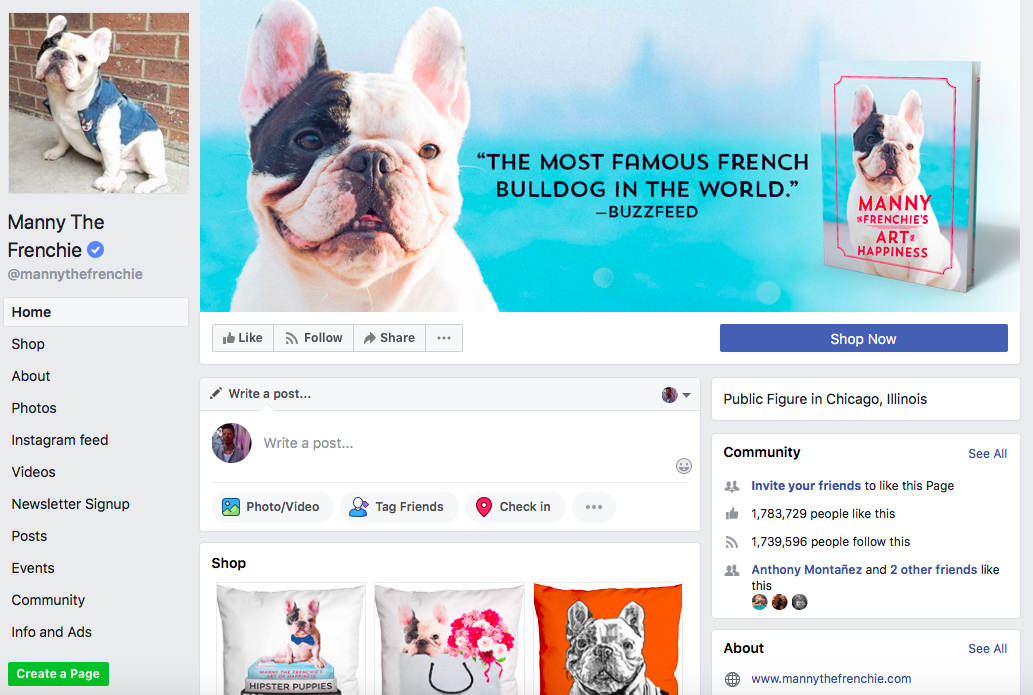 Manny may be a French bulldog, but he’s also one of the top Chicago influencers. He has more than 1.7 million likes on Facebook and 1.1 million followers on Instagram. Despite being a dog, he’s a top Chicago influencer, sharing adorable photos and partnering with quality pet brands to promote products with his followers. 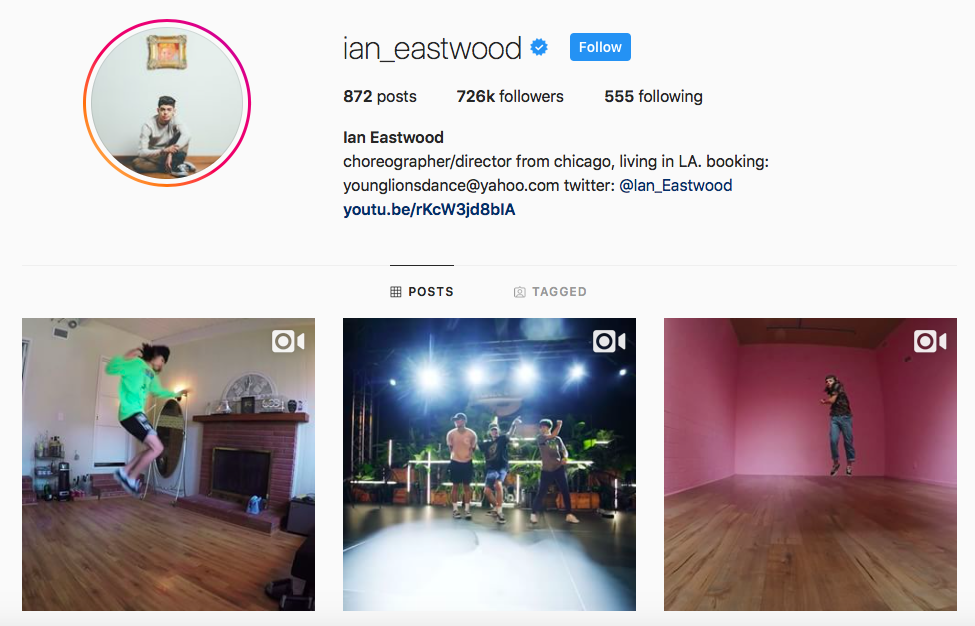 Ian Eastwood is one of the top dance influencers on social media, and he’s also based in Chicago. He posts photos and videos of his work on YouTube to more than 773,000 subscribers and Instagram to his 726,000 followers. Videos of Ian and his dance crew have racked up millions of views. 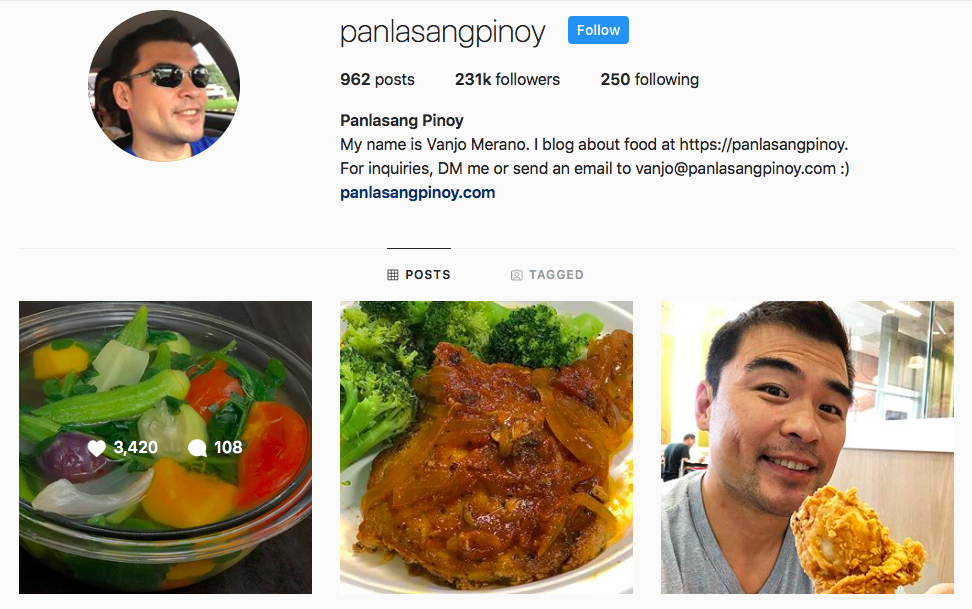 Vanjo Merano brings Filipino cuisine to the masses on his blog Panlasang Pinoy. The top Chicago influencer shares photos, videos, and recipes that celebrate Filipino foods on his blog and Facebook where he has more than 2.7 million likes. On Instagram, he shares his creations as well as dishes he finds around Chicago to 231,000 followers. 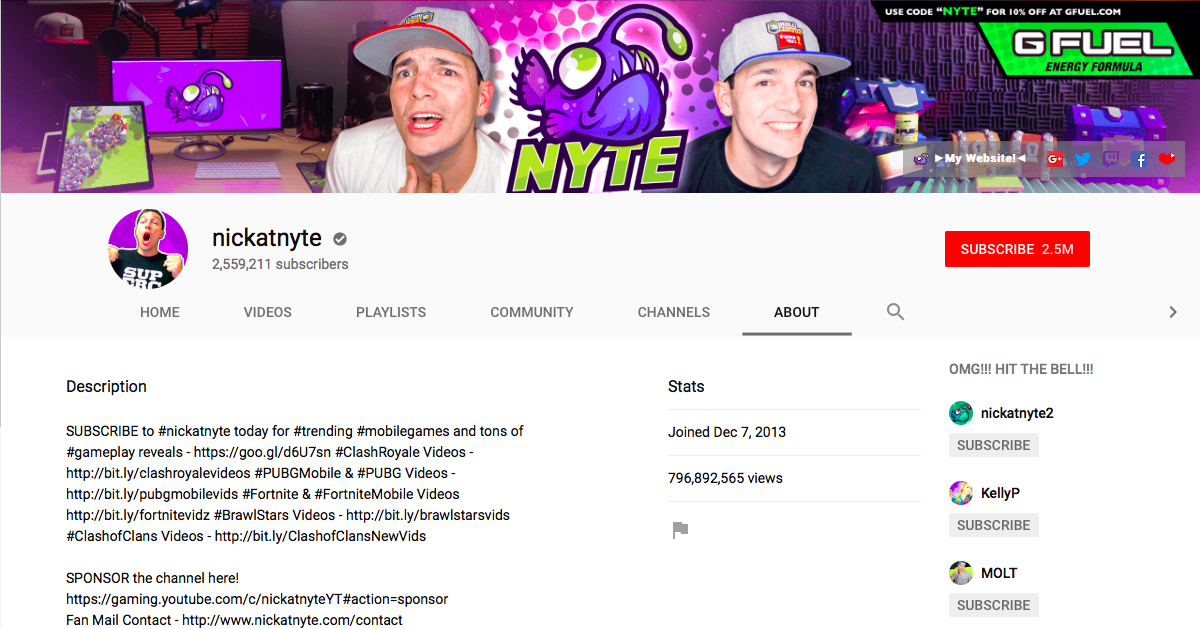 Nickatnyte is a YouTube creator based in Chicago who has more than 2.5 million subscribers tuning in to watch his gaming videos. He also connects with more than 230,000 fans on Twitter, where he regularly posts gaming updates and photos from his life. 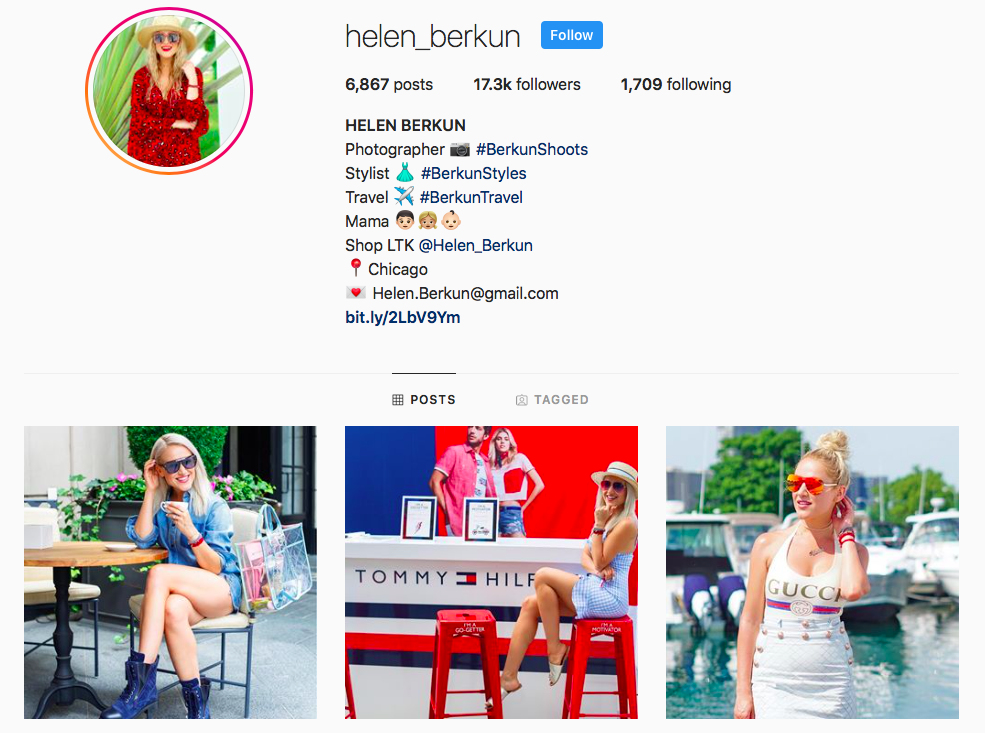 Helen Berkun is a prominent fashion influencer in Chicago with a following of 17,300 people on Instagram. She posts shots of her styles in a variety of Chicago backdrops. Berkun has partnered with many major designers including Tommy Hilfiger and Gucci for her posts. 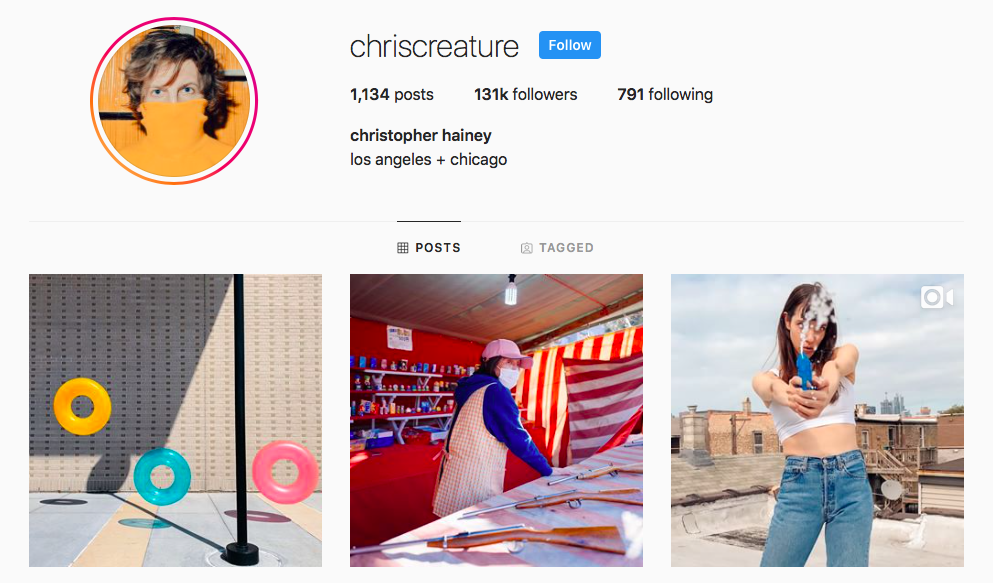 Christopher Hainey is one of the top Chicago influencers with a following of 131,000 people on Instagram. He’s made a name for himself as a photographer, posting portraits, landscapes, and other artistic shots to his account. 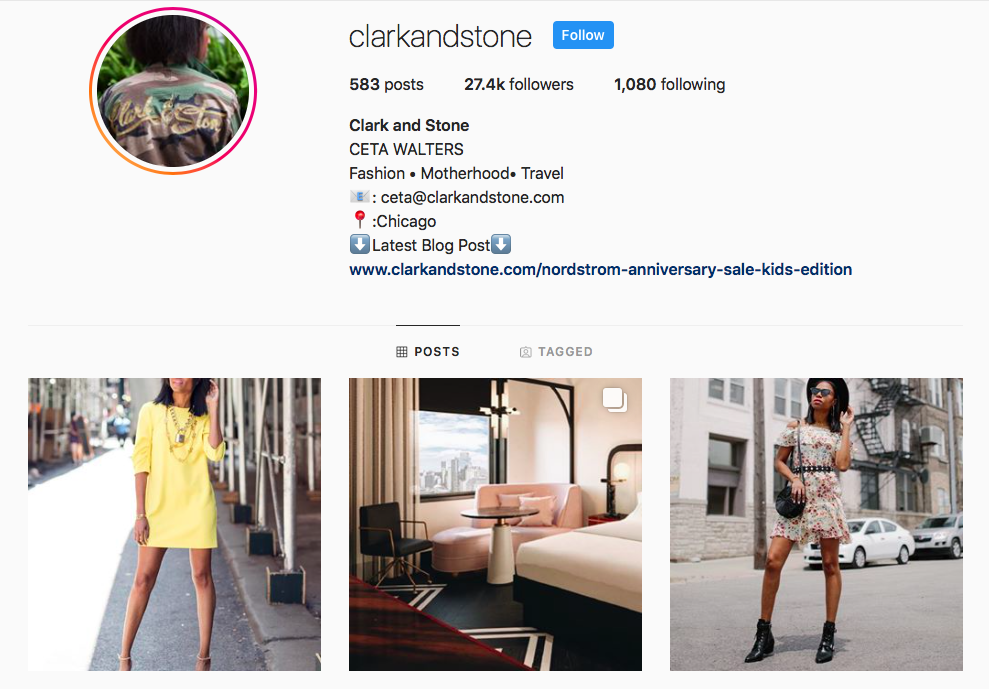 Ceta Walters founded the blog Clark and Stone as a refuge from her life as a stay-at-home mother. She now has a following of 27,000 people on Instagram who love to keep up with her fashions, travels, and day-to-day life as a mother. The many sides of Chicago are featured in her photos, too. 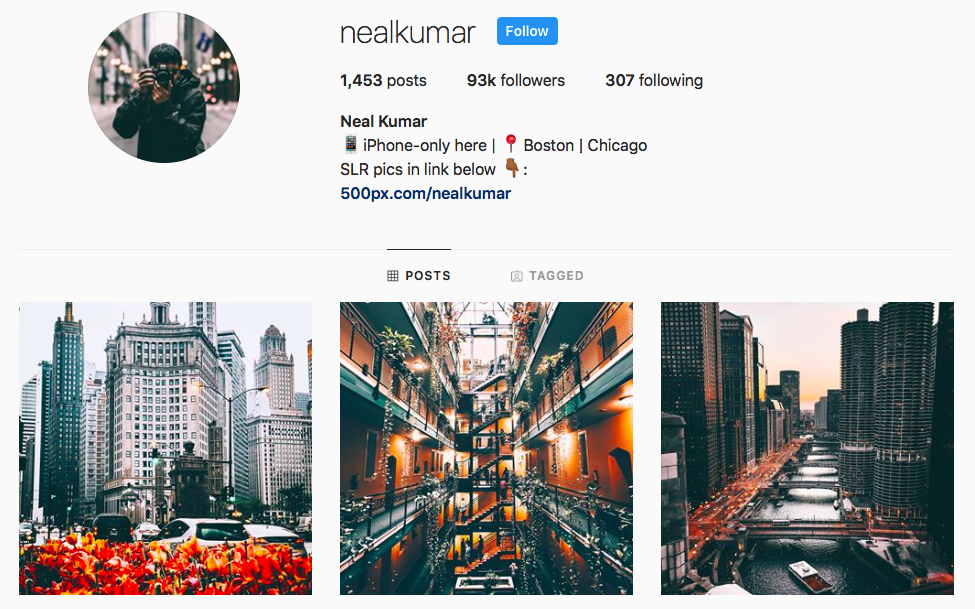 Neal Kumar’s architectural shots from around Chicago and other major cities have caught the attention of 93,000 Instagram followers. He offers unique perspectives and shows the city in ways that people don’t normally see it. Additionally, he shoots all of his photos on an iPhone. 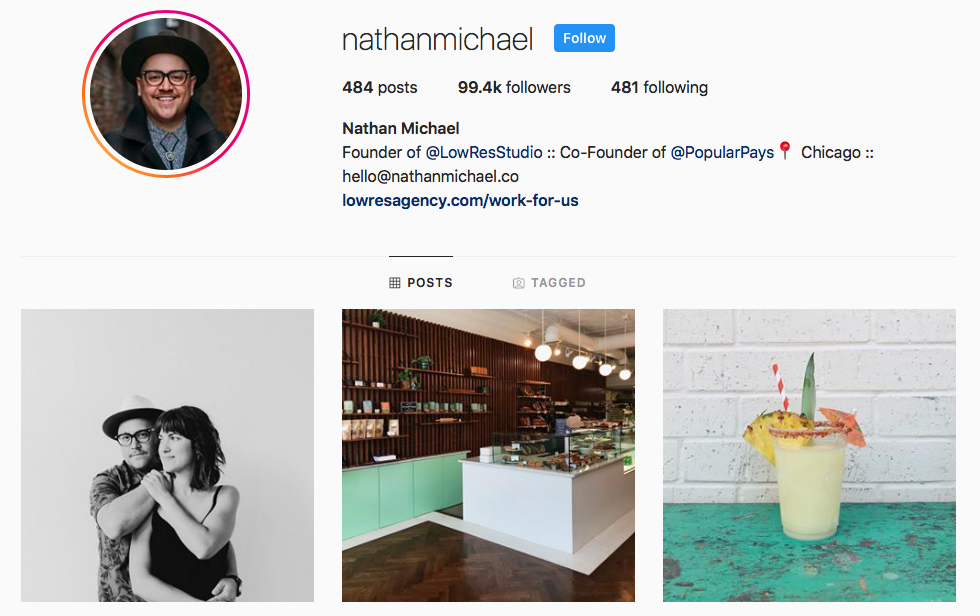 Nathan Michael is a visual storyteller who shows his 99,000 Instagram followers some of the lesser-known spots in Chicago. He shares a combination of architectural shots, food pics, portraits, and artistic photos on his account. His work has led to partnerships with major brands including MasterCard, Postmates, and McDonald’s. 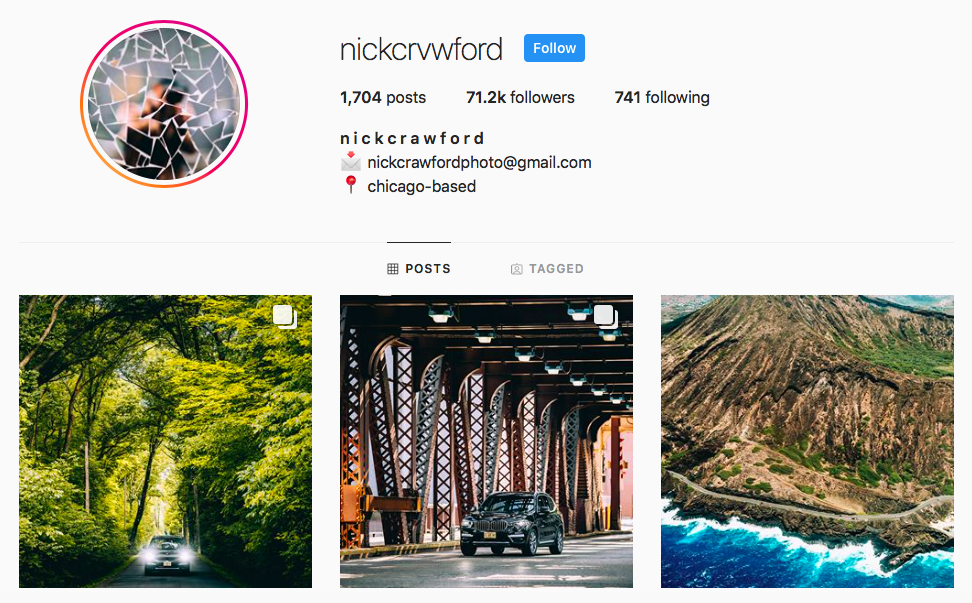 Chicago-based photographer Nick Crawford inspires people to travel even if they’re just staying in the Windy City. On his Instagram, 71,000 followers will find a combination of landscape, architecture, and artistic shots combined with sponsored posts from partners including Under Armour, Goose Island, and Charles Smith Wines. 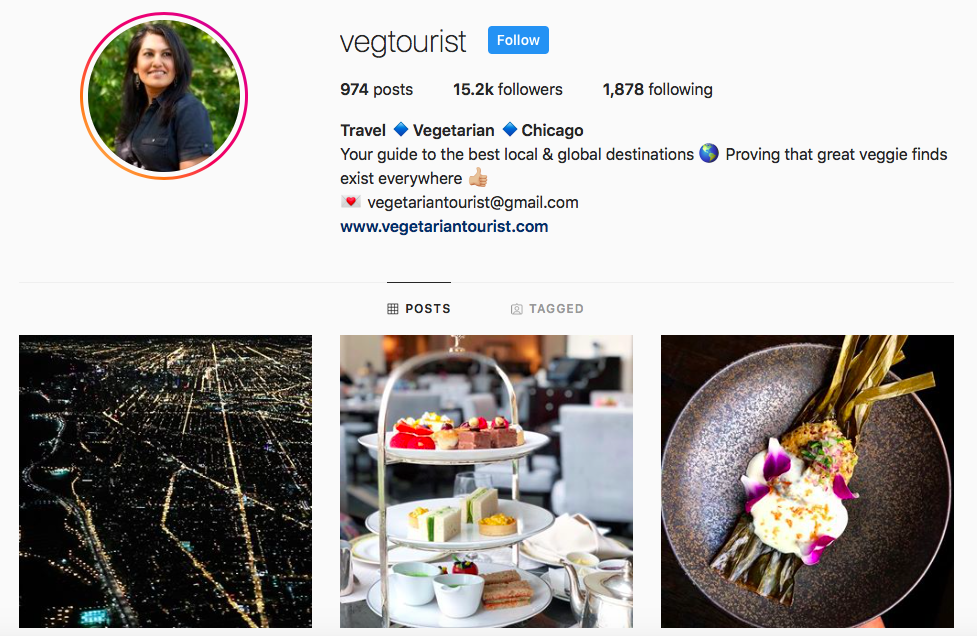 The Vegetarian Tourist is a food blogger and the go-to source for vegetarian eats in Chicago. While she posts photos from her travels all over the world, her focus is on restaurants and dishes from the Chicago area. She has over 15,000 followers on Instagram. 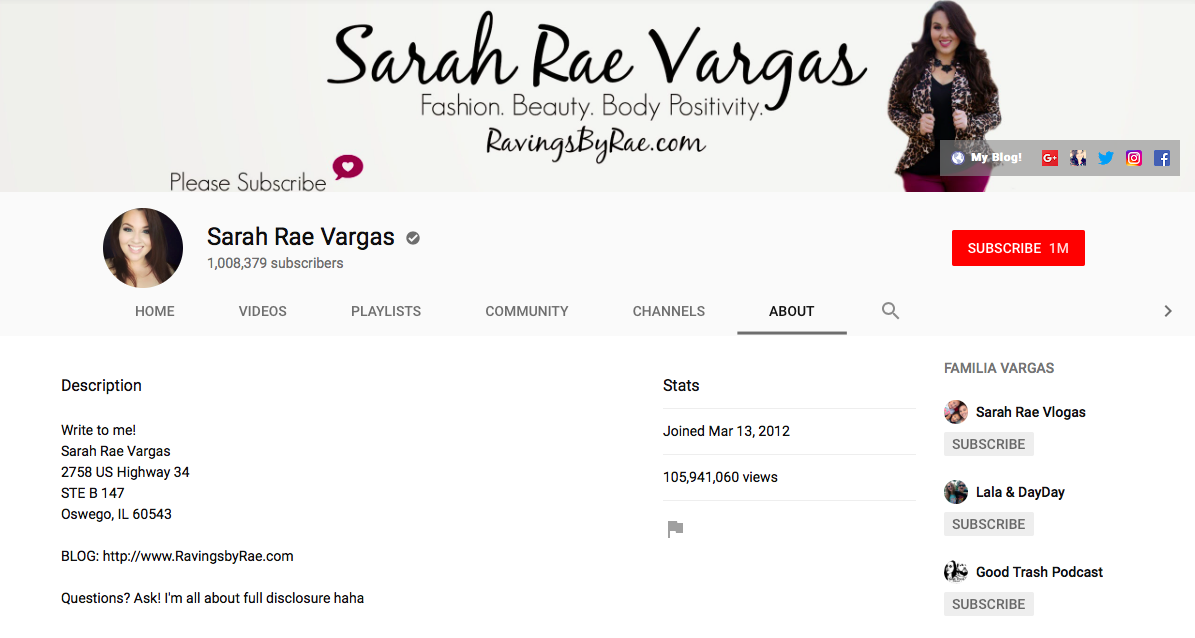 Sarah Rae Vargas is a YouTuber and blogger who focuses on fashion, beauty, and body positivity. She has more than one million YouTube subscribers and 350,000 Instagram followers with whom she shares fashion tips, beauty secrets, and glimpses into her personal life. 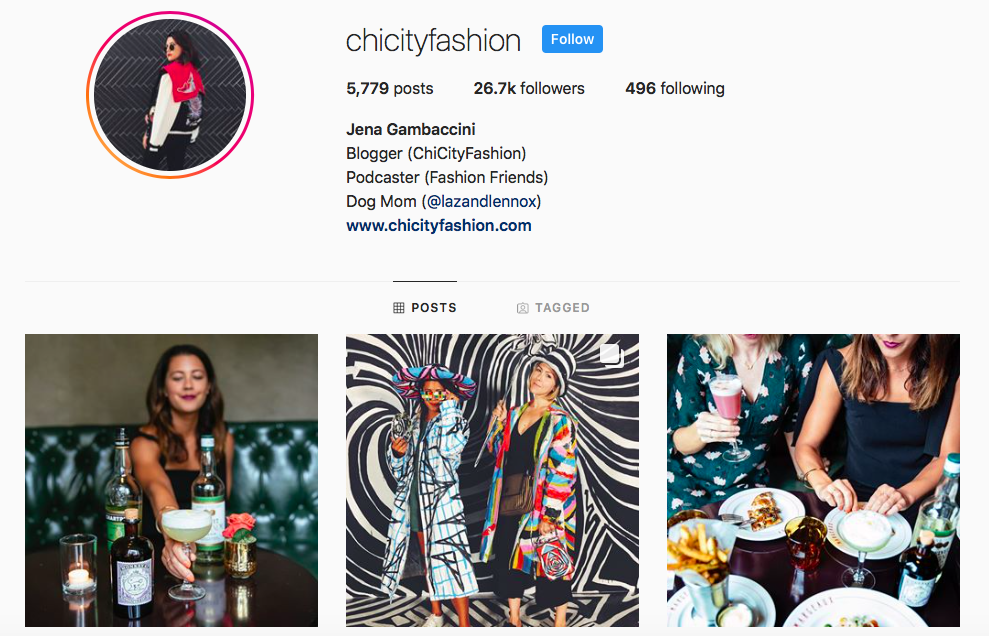 Jena Gambaccini is the owner of fashion blog ChiCityFashion and podcaster for Fashion Friends. Her Instagram account, with 26,000 followers, is colorful and inspirational as she models her effortless styles. Gambaccini also adds city shots, food photos, and sponsored posts from her partners for a well-rounded page. 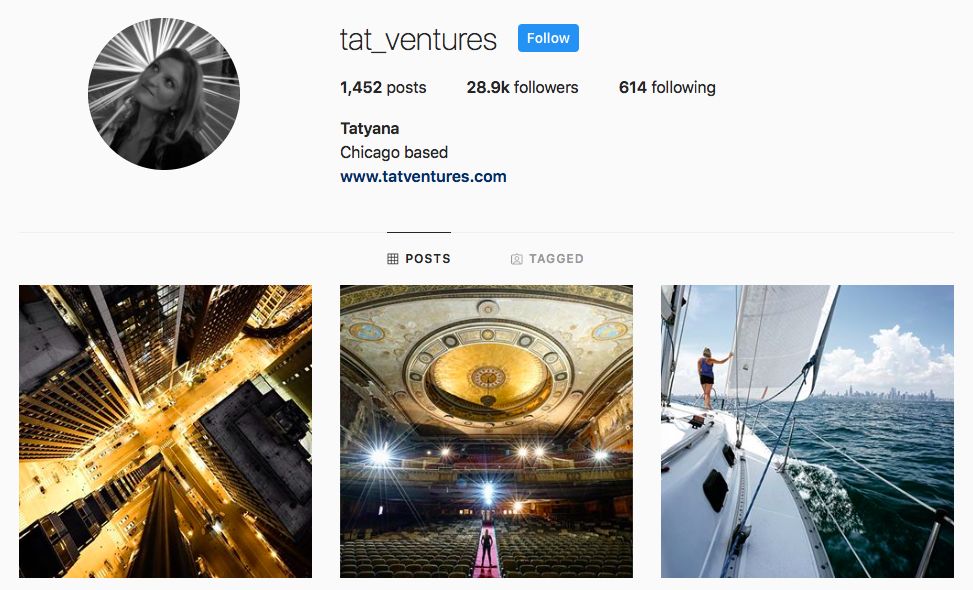 Tatyana is a photographer who showcases Chicago and the surrounding area through her photos on social media. Nearly 29,000 Instagram followers explore the city and the world through her camera. Her stunning photos have led to partnerships with brands such as Lexus and Niche. 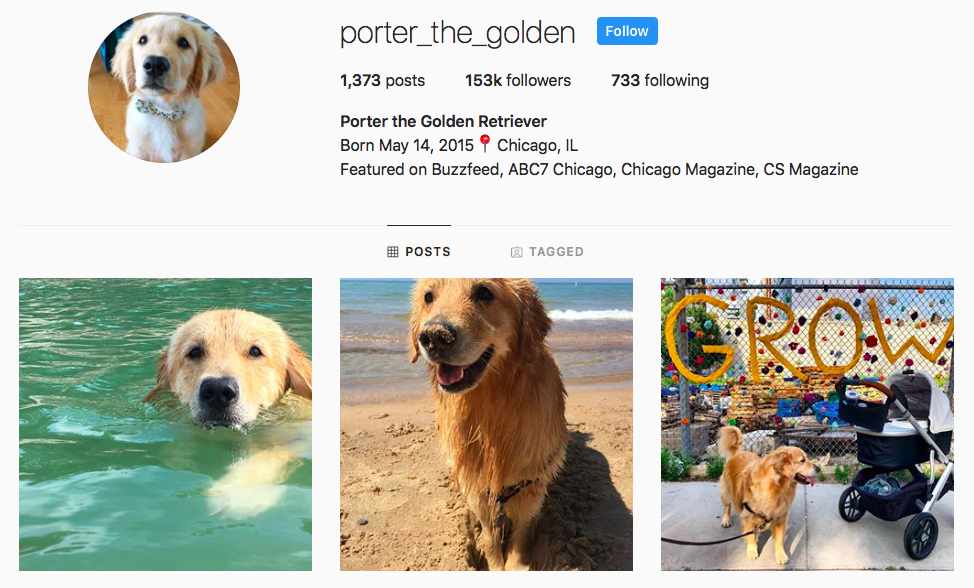 Porter is another dog that has gained quite a following on Instagram. His travels and photos from around the city have helped him reach more than 153,000 Instagram followers. He’s so popular he’s partnered with Dyson and several pet treat companies.